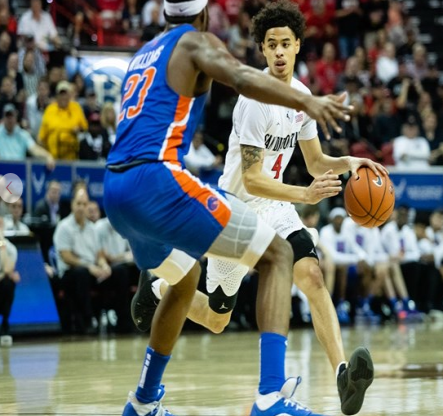 The top-seeded Aztecs (30-1) made 15 3-pointers and shot 49.1 percent from the field. They will face the Utah State-Wyoming winner in the championship game.

San Diego State trailed by 16 points with five minutes remaining in the first half, then outscored the Broncos 64-31 over the final 25 minutes on the way to its third double-digit victory over Boise State (20-12) this season.
Alex Hobbs led the Broncos with 21 points on 7-of-11 shooting. RJ Williams and Derrick Alston each had 12 points..
The first half featured a series of runs by both teams, with the Aztecs sinking their first three 3-point attempts to open a 9-2 lead. Boise State took control from there, scoring 26 of the next 31 points, which was part of 35-12 run that gave the Broncos a 37-21 lead with five minutes to remaining in the half.
That's when San Diego State woke up -- on both ends of the court. The Aztecs closed the half on a 19-2 tear to tie it at 40, with guard Jordan Schakel's 3-pointer in the waning seconds capping the run. San Diego State made six of its final seven shots and held the Broncos without a field goal over the final five minutes.
DIALED IN FROM LONG DISTANCE
Both teams were sensational from 3-point range in the first half, combining to go 15-for-29, with San Diego State making 10 of 20. The Aztecs were particularly streaky, as they started 4 for 5 from beyond the arc, missed their next six attempts, then drained six of their next nine. 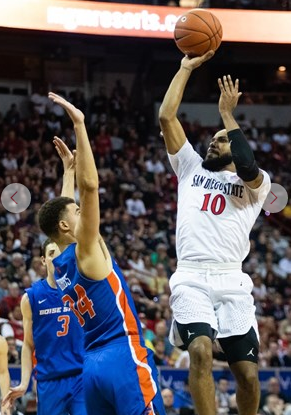 San Diego State remained hot from 3-point land following halftime, connecting on three of their first four shots. Conversely, Boise State misfired on 10 of its 13 3-pointers in the second half.
AT HOME ON THE ROAD
San Diego State remains the nation's only unbeaten team in road or neutral-site games (16-0). Every other team has at least two such defeats.
Box
Postgame notes
Postgame quotes