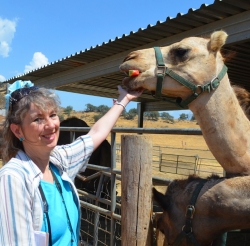 August 5, 2012 (Ramona) – What loves eating watermelon, has feet like snowshoes, and can guzzle up to 40 gallons of water at a time?

These are among the surprising facts about camels that I learned during the Watermelon Days Festival at the Oasis Camel Dairy on a sweltering midsummer day in Ramona. The climate here is ideally suited for these “ships of the desert”, which delighted audiences at this unique East County attraction. 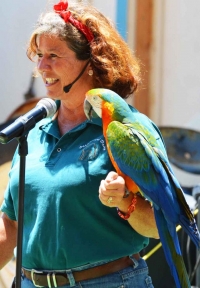 The ranch doesn’t  actually produce camel milk for sale, but does offer camel milk products such as soaps and lotions, as well as camel rides, camel races, up-close visits with the animals, and rental camels for special occasions.  The facility also stages live bird shows—and for owners Gil and Nancy Riegler, the business was a marriage made in heaven.

“My birds liked his camels and his camels liked me,” says Nancy, who delighted visitors with a show that included a macaw, parrot, cockatoo and toucan.  These talented talking birds artfully imitated everything from a cat to a race car--and even a California earthquake!

View videos of the bird show:

The star of  this stage, however, was Sampson –a young camel in training.  Gil explained that he first became enamored with camels after working with physically handicapped people in a project that involved camels.

View a video excerpt of the camel show:

“They are so docile and sweet,” he said, recalling a camel that would lay its head in the lap of a wheelchair-bound 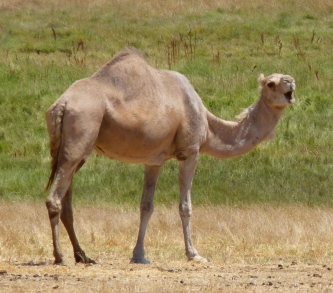 man, who would pet the large animal.

Gil acquired his first camels online from a farm in Atlanta.  “They were too skinny and had no humps,” he recalled.  “Within two months, each camel gained 150 pounds. One of them was Sampson’s mother.”

These are dromedary camels, the one-humped variety.  Worldwide, there are none in the wild; all are domesticated, including about 3,500 in the U.S.

In many parts of the world, camel’s milk is prized for its health benefits, Gil says.  “It’s the closest thing to mother’s milk. There are no allergies to it. It’s good for autism and Crohn’s disease….overseas it is used in hospitals.  We drink our camel milk every day.”

But in California, selling raw camel milk is illegal due to rules covering all commercial dairies to prevent contamination. “You can’t do any raw milk. You need commercial equipment…anybody with a family dairy would not be able to afford that; they are small scale.”

Instead of pasteurization, Gil would like to see the rules changed to require cleanliness standards, batch-testing of milk and all animals tested for diseases such as TB and brucellosis.  “In Texas, you can get raw milk from farmers,” he noted. 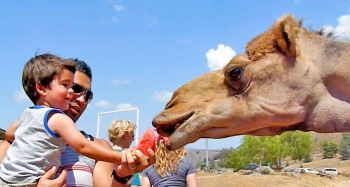 The dairy does, however, sell  camel milk power from the Netherlands, as well as a serum derived from camel’s milk which purportedly has antviral, antifungal and antibiotic properties when applied topically.

Gil educates the crowd about camels.  “Their red cells are oblongs; they swell up when they drink water.” A camel can go two weeks without drinking any water—but when it arrives at an oasis, the camel can drink up to 40 gallons at a time. “They look like big balloons,” Gil says.

Camels have soft padded feet that spread out to walk on sand,  similar to how snowshoes work.  Mother camels give birth to three or four babies a year. But milking is a challenge, since they only give milk for about 90 seconds at a time. 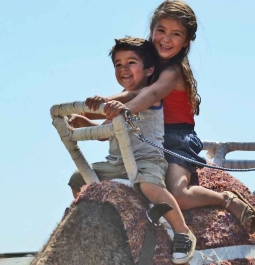 “Sampson was bottle raised…We’re letting him be himself,” said Gil, when the camel occasionally balked at stepping onstage or off.  Helpers pushing from behind demonstrated the technique for moving a recalcitrant camel.

Gil says the animals’ reputation for spitting is an exaggerated.  “None of our camels have ever spit,” he said.  “Camels only spit when they are mistreated or bored.” He did admit to being the recipient of a spitting camel once while visiting Egypt, however.

After the show, eager guests lined up to feed watermelon slices, choosing their camels and petting the docile animals.  “You feed them with an open hand,” Gil explained, as a camel obligingly slurped up the juicy fruit.

On this occasion, camel rides were also offered to kids as a guide led them. (Adults wishing to channel their inner bedouins may rent the animals for special occasions.)

One guest, Wendy Enright, told ECM that “I’m here learning how to walk camels.”  She’s from the Palm Desert area. “We’re going to be renting his camels for tours of the Living 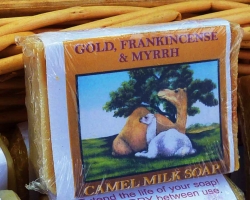 Want to rent a camel?  A popular time is Christmas. "We do Nativity and take them right into churches,” Gil said. Oasis’ camels have been featured on Animal Planet and Nickelodeon, made guest appearances for local charity fundraisers, and a pair of gorgeous geldings have been saddled up for camel raises for worthy causes.  Gil and Nancy also assist others getting starting in the camel-raising business.

The camels get alont well with people and add an exotic touch to local events.  The website promises, “Parades, receptions, corporate parties, theme parties and more are a big hit with camels!"

Fun  story! I've often wondered about the camel dairy while driving by.