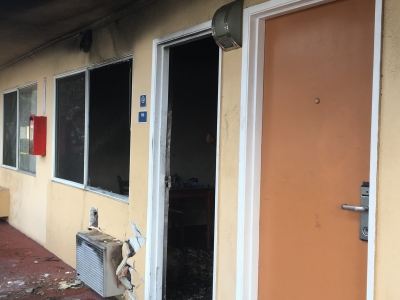 By Miriam Raftery
May 6, 2019 (El Cajon) - Firefighters rescued a man in a burning hotel in El Cajon early this morning.
Heartland Fire & Rescue crews from El Cajon, with assistance from Santee Fire and San Miguel Fire, were dispatched to the fire at the Relax Inn in the 1200 block of W. Main Street at 5 a.m.  Fire crews arrived within five minutes to discover smoke and fire coming from a downstairs bedroom.
"Firefighters quickly attacked the fire and immediately discovered an adult male hanging from a bathroom window in the affected fire room," says Sonny Saghera with Heartland Fire & Rescue. "Fire crews gained access to the victim and then removed him from the hotel. He was transported to UCSD hospital with smoke inhalation injuries."
The fire was knocked down within 8 minutes. There were no firefighter injuries reported.
The cause of the fire is currently under investigation by the San Diego Sheriff's Bomb and Arson Department.

Heartland Fire & Rescue displaying their bravery and skills once again.