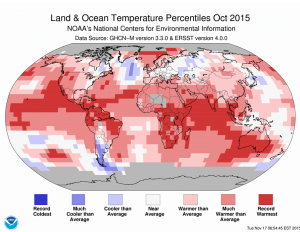 November 21, 2015 (San Diego’s East County) – Worldwide,  last month’s temperatures over land and oceans made this the hottest October in the past 136 years since data has been kept.  It was also the sixth straight month in which a global temperature record has been broken – and was the greatest departure from average temperature for any month since record keeping began in 1888.

The combined average temperature over global land and ocean surfaces for October 2015 was 0.98°C (1.76°F) above the 20th century average of 14.0°C (57.1°F). Record warmth was observed across the entire southern half of Australia, part of southern and southeastern Asia, much of central and southern Africa, most of Central America and northern South America, and parts of western North America, according to analysis by the NOAA Climate Prediction Center (CPC).

Coppock sports a T-shirt that reads, “The world is going to hell, and speeding u getting there,” along with a chart to show global warming.

Now he says if the October extreme temperature reading from NASA is accurate, “That slogan is going to have to be replaced with, "The world has gone to hell!"