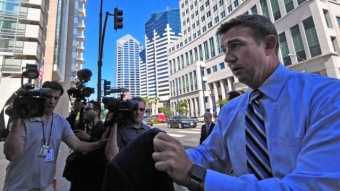 September 6, 2018 (San Diego) - he following is the statement released Thursday by the House Committee on Ethics, lightly edited:

Accordingly, pursuant to Committee Rule 17A(h)(1), the committee made OCE’s report, but not its findings, public at that time. On March 23, 2018, the committee announced that it was continuing to defer its consideration of the matter at the request of DOJ.

Pursuant to Committee Rule 18(e)(2), within 30 days of a member being indicted or otherwise formally charged with criminal conduct, the committee shall either establish an investigative subcommittee (“ISC”) or report to the House describing its reasons for not establishing an ISC.

In accordance with House Rule XI, clause 3, and Committee Rules 10(a)(2) and 18(e)(2), and following committee precedent, the committee unanimously voted on September 6, 2018, to establish an ISC.

Pursuant to the committee’s action, the ISC shall have jurisdiction to determine whether Rep. Hunter violated the Code of Official Conduct or any law, rule, regulation, or other applicable standard of conduct in the performance of his duties or the discharge of his responsibilities, with respect to allegations that he engaged in unlawful conspiracy, fraud, falsification of campaign finance records, and prohibited use of campaign contributions.

DOJ has requested that the committee defer consideration of the matters in the ISC’s jurisdiction. The committee, again following precedent, unanimously recommended to the ISC that it defer action on its investigation at this time. No other public comment will be made on this matter except in accordance with committee rules.

Most highly opinionated honest public figures are forthright in the area of east county. At this time you are a fictional person parading in visual text only. It's up to you to come to local meetings and shake the hands of others that work hard party affiliate or not to make our areas a better place. You are a member of the rotary Club? perhaps your a member of the local youth events? We welcome those with strong local support, those are the members of society we we welcome in our community. My Name is Kevin and if you wish to say hello I will be at the . FREE SAT DIAGNOSTIC TEST FOR HIGH SCHOOL JUNIORS AND SENIORS at the Alpine Library on September 8, 2018 from 12pm to 5pm. Come visit and the members of the community, we call it get real and off the net.

Didn’t see you, Kevin, at the Alpine Library for the FAKE NEWS – The Real Problem – A Crash Course in Citizen Journalism. It’s up to you, Kevin, to attend these events and become a part of the Community!

This happens often to those in office, others with differing views without knowledge of FACT will jump as lemmings off the ridge line. The court system is in place to prevent the lemming effect or in the old days Lynching a person was killed first without facts. Hyper partisanship is a dangerous venue and should be as the courts say avoided. When speaking about voting one way or the other vs the choice of one party intimating the lemming effect one should take pause it has been shown over and over the opposing party may indeed have hidden errors not yet exposed as well.
Voters will take into consideration all of what's happening with Hunter before casting their ballot.