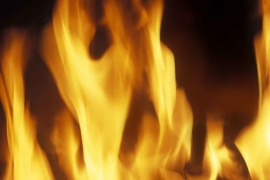 July 29, 2020 (La Mesa) – A home in La Mesa was destroyed Tuesday, last night, in a fire that also caused minor damage to a neighboring residence.

Crews from Heartland Fire & Rescue in La Mesa and Lemon Grove responded, along with San Miguel Fire and San Diego Fire departments, to the blaze reported in the 4900 block of Williams Avenue in La Mesa around 8:15 p.m.

“Due to the heavy fire present and threat to a nearby apartment complex, a second alarm was called for, bringing an additional four engines, ladder truck, and chief officer,” says Sonny Saghera, public information officer for Heartland Fire & Rescue. Crews were able to control the fire within 20 minutes, he says, adding that the fire did extend to a nearby house, causing some minor damage.

The Red Cross was called in to assist a man displaced from the home.

The cause of the fire is currently under investigation. There were no firefighter injuries reported.

The house was a total loss. Estimated damage for the structure and contents is estimated at $200,000.