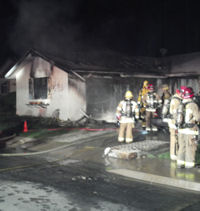 March 25, 2012 (La Mesa)—A family of four escaped their burning house during the night, alerted to trouble by a garage door going up and down. Heartland Fire & Rescue Crews from La Mesa and El Cajon battled the blaze reported at 2:21 a.m. in the 5700 block of Lambda Lane.
Fire crews arrived in six minutes to discover heavy fire and smoke coming from the attached garage of a single story, single family residence. Firefighters stretched hose lines to the interior of the house and aggressively fought the fire preventing the fire from spreading to the interior of the home.

“The quick attack by firefighters confined the fire to the garage preventing it from spreading to the main body of the house,” said Sonny Saghera with Heartland.

Fire investigators were not able to determine the exact cause of origin, but investigators believe it to be electrical in nature in the area of the garage.  Damage to the structure and contents is estimated at approximately $250,000.
The American Red Cross is assisting two adults and two children who were displaced by the fire.