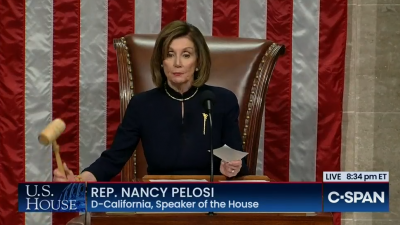 December 18, 2019 (Washington D.C.) – Today, Donald Trump became the third president in American history to be impeached. The House of Representatives voted 230-197 in favor of Article I (abuse of power) and 229-198 on Article II (obstruction of Congress) with one member, Tulsi Gabbard, voting present.

San Diego's four Democratic reprsentatives voted in favor of impeachment. Congresswoman Susan Davis (D-San Diego) stated, "Make no mistake. We are not impeaching the President. He is impeaching himself. If you are the President, and you obstruct justice, try to bribe a foreign leader and threaten national security, you’re going to get impeached. End of story.”  Congressman Duncan Hunter, our county's only Republican representative, could not vote because he has been banned from voting by the House Ethics Committee after pleading guilty to conspiracy to spend campaign funds on personal uses.

Speaker Nancy Pelosi began the session by stating, “I solemnly and sadly open the debate on the impeachment of the president of the United States. If we do not act now we would be derelict in our duty. It is tragic that the president’s reckless actions make impeachment necessary. He gave us no choice.”

Her action came after Senate leader Mitch McConnell (R-Kentucky), who is in charge of setting rules for a Senate trial, stated, “I’m not an impartial juror,” raising concerns over a biased process. McConnell has further stated that he is "in total coordination with the White House counsel's office" and is "taking my cues from the president's lawyers."

That violates the U.S. Constitution, which requires that Senators must take an oath pledging to act as an "impartial justice" before engaging in an impeachment trial.

In addition, McConnell has said he will not call or subpoena a single witness to appear. Thus far, the President has ordered top officials who heard his controversial conversations with Ukraine’s president firsthand to defy Congressional subpoenas. Republicans have argued that Democrats relied on hearsay, despite Trump, the accused, blocking the key witnesses from testifying.

Many witnesses in the House hearing did provide second-and accounts that confirmed a whistleblower’s allegations that Trump withheld military aid needed by the Ukraine to repel Russian forces in order to pressure Ukraine’s president to announce an investigation into Hunter Biden. Intelligence officials, ambassadors and constitutional lawyers who  testified iindicated that those actions put national security at risk for Trump's personal gain, in his effort to discredit rival Joe Biden’s son and try to rig the 2020 election.

“This is serious matter even though the majority leader of the United States Senate says it's OK for the foreman of the jury to be in cahoots with the lawyers of the accused,” she said of the impeachment process, Roll Call reports. “That doesn't sound right to us.”

In a Senate trial, McConnell and Senate Republicans in the majority would set the rules, though Supreme Court Chief Justice John Roberts would preside over the trial.

At a political rally with his supporters today, President Trump said of the impeachment, “I’m not worried,” noting that all Republicans and three Democrats voted against impeachment. ““The Republican party has never been so affronted, but they’ve never been so united as they are right now,” he added.

Interestingly, back in 2008, Donald Trump in an interview with CNN's Wolf Blitzer praised Speaker Pelosi and indicated he felt she should have led the House to impeach President George W. Bush for "lies" told to start the Iraq War, yet now it is President Trump accused ot not being truthful about his actions involving foreign affairs. View video:  https://twitter.com/i/status/1207375509698596867.

The House vote to impeach Trump was the largest vote margin ever to impeach a president.  Nationwide, pro-impeachment rallies were held last night in major cities across the U.S., including San Diego and in East County, El Cajon. Anti-impeachment counter-protesters were sparse in number.  Also of note, the nation's most prominent newspapers have virtually all published editorials in favor of impeachment, as have dozens of smaller newspapers coast to coast.

Only two prior U.S. presidents have been impeached: Andrew Johnson and Bill Clinton, but the Senate voted against convicting and removing them from office; Johnson prevailed by a single vote.

Richard Nixon, who also was accused of cheating to win an election and then obstructing justice to cover up his crimes, resigned after members of his own party informed him they were prepared to vote to impeach and remove him from office. He was later pardoned by Vice President Gerald Ford.