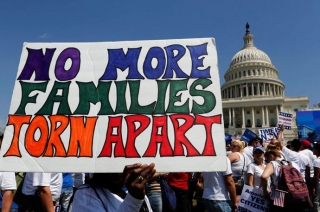 July 1, 2017 (Washington D.C.) – The U.S. House of Representatives has passed House Resolutions 3003 and 3004, measures aimed at cracking down on undocumented immigrants.  The measures, which punish sanctuary cities and states by withholding key funds, also boost penalties for certain immigrants who reenter the U.S. illegally after being deported three or more times.

The bills fulfill a portion of President Donald Trump’s campaign promises, but have drawn a letter of opposition from 400 nonprofit organizations on behalf of immigrants and their families.

What the bills would do

H.R. 3003 is titled the “No Sanctuary for Criminals Act.”   However, it would impact undocumented immigrants who have not committed any crime other than entering the U.S. illegally, in addition to affecting criminals.  The measure would authorize blocking federal grants for law enforcement, anti-terrorist activities, and national security purposes among other things to states or local governments that have policies limiting officials from cooperating with mass deportation efforts by the Trump administration.

H.R. 3004 is titled “Kate’s law” after a San Francisco woman, Kathryn Steinle, who was killed by a man who had previously been deported multiple times.  It would increase penalties for people who reenter the U.S. illegally after being deported three or more times, or after being convicted of certain crimes.  Maximum sentences could be up to 25 years in prison.

But the bills have drawn strong opposition from advocates for immigrant families.  Christian Ramirez, human rights director for Alliance San Diego, a nonprofit that works to protect safety, equality and justice for all individuals, states, “Having police officers do the work of border agents undermines public trust and threatens public safety for all. Instead of tearing families apart, we should rein in the extraordinary powers of immigration officers, who can stop, interrogate and search children on their way to school and parents on their way to work --all done without a warrant or reasonable suspicion.”

He adds, “Today more than ever, cities and states need to stand up and support policies like Senate Bill 54, "California Values Act," which prevents state and local dollars, and law enforcement agencies, from helping immigration officials terrorize families.”

The pair of bills now advance to the Senate. If approved by the Senate, President Trump has indicated he will sign them into law.