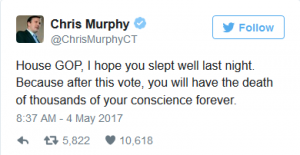 May 5, 2017 (Washington D.C.) - On Monday, ECM reported that a bill that could repeal and replace the Affordable Care Act, also known as Obamacare, was heading to a rushed vote in the House on Thursday.  That bill, the American Healthcare Act, passed yesterday narrowly.

The bill passed by a four-vote margin with San Diego Republicans Duncan Hunter and Darrell Issa both voting in favor. Had they voted against, the vote would have been tied and the measure would not have passed.

The total vote count was 217-213 and came on President Donald Trump's 105th day in office as Republicans strive to work toward reforming the American healthcare system without mandated insurance.

However, the bill still has a ways to go, as it must now face the Senate, where a handful of Republicans immediately rejected the bill.  In the House, though it eventually was futile, 20 Republicans voted no.  Both the House and Senate must agree on the language of the bill, which could be challenging.

Even before the vote, Republican senators voiced reservations about the bill, which would roll back the expansion of Medicaid under the Affordable Care Act.

"Yes, premiums will be coming down; yes, deductibles will be coming down, but very importantly, it's a great plan," Trump said on Thursday at a press conference at the White House Rose Garden.  Six weeks ago, the House had failed to garner enough votes to pass an earlier version of the bill, a disappointment to Trump and Speaker of the House Paul Ryan (R-Wisconsin).

While Trump rallies Republican Kentucky senator Mitch McConnell to talk up the bill in the Senate, Democrats voted unanimously against it.

"I have never seen political suicide in my life like I'm seeing today," Representative Louise M. Slaughter (D-New York) said on the House floor before the vote.

Representative Nancy Pelosi (D-California) warned Republicans "You have every provision of this bill tattooed on your forehead.  You will glow in the dark on this one."

The bill would eliminate tax penalties for people who choose not to invest in health insurance.  However, low-income Americans are at risk if the bill passes, for it will lower state-by-state expansions of Medicaid.  The bill would offer tax credits of $2,000-$4,000 a year, depending on age, in contrast to the government-subsidized insurance policies offered by the Affordable Care Act.  A family could receive up to $14,000 a year in credits.  The credits would decrease for families making over $150,000/year and individuals making over $75,000/year.

The bill would trim the federal budget deficit considerably by $839 billion over a decade, but would leave 24 million more Americans without health insurance, according to the Congressional Budget Office.  It also would eliminate taxes on wealthy Americans and medical industries that were used to pay for the Affordable Care Act.  Premiums would 15-20 percent higher in 2018 and 2019, but lower afterwards.  States can seek a waiver from Obamacare's current requirement that insurers charge people the same for coverage regardless of whether they have a pre-existing condition.  If this happens, insurers can charge sick people far more if their coverage has lapsed and may not include treatment for their condition.

"States could allow insurers to set much higher rates for patients who have a pre-existing condition. That's terrifying, because patients could in essence be priced out of coverage."

"The bill ... allows insurers to go back to putting annual and lifetime limits on coverage, meaning that a premature baby on private insurance could exceed her lifetime limit on coverage before she even leaves the hospital," the American Academy of Pediatrics said.

It is unknown when the bill will go before the Senate, but it is clear that senators have a monumental decision on their hands, one that could cost them thousands of lives.

if pelosi and murphy and the rest of the dems cared about people over politics they never would have passed barrycare the way they did, nor would they be screaming now. it is all about power and centralizing power in washington. 99.99% of reps and 100% of dems don't give a rodents behind about the People or the good of the Republic