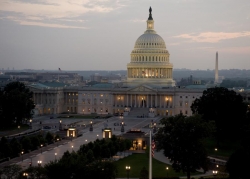 January 14, 2015 (Washington D.C.)--The House of Representatives has voted to block funding for immigration reforms ordered by President Barack Obama. The action puts the status of millions of undocumented people who would have been allowed to stay in America under that order in limbo.  The language to block funding was inserted into a measure to fund the Department of Homeland Security through September.

In addition, the House added an amendment to halt the Deferred Action for Children Arrivals Program, which stopped deportation for some immigrants who were children when they came to America.

Republicans who pushed through the measure claimed the President lacked legal authority for his actions without backing from Congress. Speaker John Boehner, in a floor speech, claimed Obama “ignored the Constitution.”

Other amendments would promote hiring people who are here legally and prioritize deportation of undocumented immigrants who have been convicted of domestic violence or sex crimes.

President Obama has indicated previously that he would veto the bill if it contained “ideological provisions.”

The bill also increases funding for Customs and Border Protection, U.S. Citizenship and Immigration Services, and the Secret Service as well as boosting money for cyber-security, but reduces funds for the Coast Guard and some other programs.

The added funds are to boost border surveillance and build more detention facilities for undocumented immigrants, a response to last year’s influx of immigrants, mostly minors, from Central America.