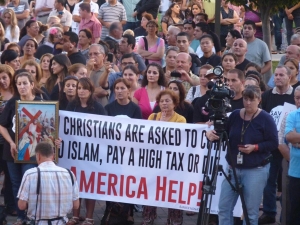 November 19,2015 (San Diego’s East County) –The House of Representatives has passed a bill to suspend admission of refugees from both Syria and Iraq into the U.S., until national security agencies certify that they pose no security risk.

The measure passed by 289 to 137, a wide enough majority to override President Barack Obama’s threatened veto, with 47 Democrats joining Republicans to push the bill through.  But Senate Minority Leader Harry Reid has pledged to block the bill in the Senate.

Meanwhile some Senate Democrats are backing two alternative measures.  One would ban people who have been to Syria or Iraq in the past five years from entering  the  U.S. using the visa waiver program, which currently admits 20,000 people a year—far more than the refugee program, with far less security screening.  The second bill would prohibit people on a terrorism watch list from buying guns or explosives.

Here in San Diego, home to many refugees from the Middle East,  reactions to the efforts to crack down on refugee resettlement here has been strong.

David Murphy is the executive director of the International Rescue Committee San Diego program.  He called the House measure “pure political pandering,” adding that it is “particularly shameful for Democrats not to stand by the President when he puts out a statement of policy declaring he will veto the GOP bill.”

Murphy notes that other bills would restrict funding for refugee resettlement. Murphy asks”Why are they focused on tearing down humanitarian protections for the victims of ISIS, rather than focusing on how to combat ISIS and end the war in Syria?”

The House measure would ban all refugees from Iraq and Syria, including Chaldeans and other Christians.  East County is home to some 40,000 or more Chaldean and Assyrian Christians from the region.

Mark Arabo, a leader in the Iraqi Christian community locally and nationally, issued a statement earlier this week after numerous governors sought to deny entry to refugees from the Middle East.

"Our national security is of the utmost importance, and takes precedent over any potential refugees that may seek the United States,” Arabo said. “Admitting this large number of refugees is difficult, we are left with two options. Accept refugees only after thorough background checks or fix the countries in which they came from. Both options are viable but come with a different level of sacrifice.” But he concludes, “We cannot turn our backs on Christians and other religious minorities that seek the refuge of the US. It is our moral obligation to grant them the safety they deserve, but only after comprehensive individualized inspection.”  He voiced hope that admission of refugees would be granted “after the fog of the war on terrorism has passed. ”

The American-Arab Anti-Discrimination Committee issued this statement:  "The effect of this bill is to block refugees from coming to the U.S. by creating more hurdles to an already stringent process. The U.S. already has a vigorous 18-24 month vetting process for refuges. If it becomes law, this bill would require the most stringent vetting ever for refugees. It would require the nation’s three top security officials — the Homeland Security secretary, FBI director and national intelligence director — to certify to Congress that each individual Syrian or Iraqi refugee is not a security threat before the refugee can be admitted into the U.S."