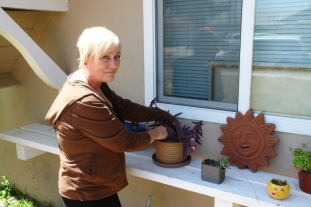 The 46-year-old is cancer free after going through rigorous chemotherapy sessions and multiple surgeries.

And thanks to the County’s rental assistance program, April and her three children now have a permanent place to live.

April, who was born in Atlanta but raised in San Diego, knew she was not in a healthy relationship. Her partner who was addicted to meth used to beat and punch her.

She was fighting her own demons. She started drinking heavily after her mother died in 2008. On a whim, they moved to North Carolina. He returned to the San Diego area two years later. He left April and her three boys behind, including her youngest who is her partner’s son, who was 3 years old at the time.

In early 2016, April got more bad news. She was diagnosed with stage 4 breast cancer.

“My condition was very serious,” April said. “The percentages of survival were very low.”

But even though her odds of survival were low, she did not give up.

Two years of chemotherapy and radiation followed, with multiple sessions every week. She required multiple surgeries to take care of the cancer and infections her weak immune system could not fight.

“I was going to the doctor constantly,” she said.

Last fall, things got worse. April was not working. Her husband was not paying the rent. Three months of unpaid rent went by. The landlord had no choice but to threaten them with eviction.

April was physically and mentally tired. She saw an opportunity to escape and ran away with her three boys, now 11, 13 and 17 years of age.

Terrified of being homeless

They escaped to the campground at Lake Jennings. They slept in tents but at night it got cold.

Her youngest son, who is autistic, was being teased at school. Kids were making fun of him for being homeless. Word of their situation got around the school.

“I was terrified,” April said. “I did not know what I was going to do.”

April and her children could not move in with relatives. Her two daughters, 25 and 27, had no room for her. She contemplated leaving San Diego, but did not want to leave her daughters behind. She could not move into a shelter. Her doctors advised against it. Her immune system was too weak.

“All of this was taking a toll on my health,” she said. “I had no strength.”

A parent at her son’s school heard about the family’s situation. He was a Sheriff’s deputy and knew the County had a program which might be able to assist her.

He put her in contact with Megan O’Dowd, a housing program analyst with the County Housing and Community Development Services.

They went over her situation and determined she qualified for a hotel/motel voucher and for rental assistance. O’Dowd connected her to Interfaith Community Services, one of the County’s partners.

April and her three children moved to a Motel 6 and she immediately started looking for a permanent place to live.

“They made it so easy,” April said. “All you have to do is take the first step.”

Since Oct. 2017, Housing and Community Development Services has provided 103 homeless families with emergency housing through hotel/motel vouchers for homeless individuals and families in the unincorporated area.

It also assists more than 10,900 San Diego County households each month with a big portion of their rent, paid with federal funds. The rental subsidy program enables people to afford market-rate units.

Given the low housing availability and high rents, the County offers landlords incentives to encourage them to rent their units to tenants like April.

“We offer landlords incentives to make it easier for them to rent to people looking for safe and stable housing,” said O’Dowd.

April and her three children qualified for up to $2,600 per month for 24 months. But, she said, she is frugal so she wanted a lower cost, more affordable unit.

She also got a case manager and after three months of searching, April found a 3-bedroom, 2-bath house in the North Bay Terraces community of San Diego for $2,100 per month. They moved in in late March.

With the new home came more good news. The same day the family moved in, April learned she is cancer free.

“Oh, my God. It feels so amazing,” said April, who last week met O’Dowd in person for the first time. “I got so overwhelmingly blessed. We were thrilled to sleep in an empty house.”

Once again, parents at her son’s school came through for the family. They helped her with gift cards. An El Cajon business owners group gave the family $1,500. She used the money to buy some furniture including futons for her children.

“I love it. It’s so wonderful to come home and have your own place,” said April, who’s been sober for almost six years.

Things are looking up for the family. All her children are doing well in school, including her oldest who now attends community college. Her autistic son’s behavior has stabilized.

April said she would like to get her GED and go to college. She is enrolled in the County’s CalWorks and Welfare to Work, which help people transition to regular employment. And she wants to be able to give back.

“You changed my life. I felt I had no support,” she told O’Dowd with tears in her eyes. “Now I know I can make it here. I can do anything.”

Even though I don't know you, I'm very proud of you for not giving up and for not staying in a abusive relationship. As a former meth user, I know what the drug does to some people. I thank God I never became an violent person while I used. Congrats on beating cancer, and stage 4 at that, never give up on any life, god bless you and your family, may you all have bright and colorful future
You are an inspiration to many others. Blessings to you and your family on your journey in life.