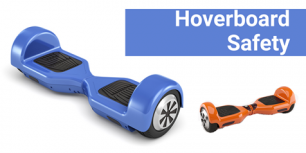 November 15, 2017 (Washington D.C.) – If your child’s holiday wish list includes a hoverboard, you may want to tell Santa to think twice before delivering one.  The Consumer Product Safety Commission issued seven more hoverboard recalls Tuesday due to fire and explosion hazards.  The Commission has previously recalled many other hoverboard models.

According to a  safety alert issued by the Commission, at least 250 fires related to hoverboards have occurred since 2015. A hoverboard caused a house fire in Pennsylvania in March that killed two young girls ages two and 10.  At least 13 people have been burned by hoverboards and they have caused over $4 million in property damage.

Lithium-ion battery packs can overheat, causing the hoverboards to ignite or burst into flames.  To see if your hoverboard is compliant with federal regulations, you can check for a UL 2272 certification label.  If your hoverboard was sold before January 29, 2016, it is not compliant.

But even some UL 2272 compliant hoverboards have overheated and sparked fires, so there is no assurance of safety with any of the devices.

If you own a recalled model, you should stop using it immediately and contact the manufacturer.

For any hoverboard, charge it only when you are home, awake and in the room to watch it.  Report any incidents of hoverboards overheating, smoking or starting fires to www.Saferproducts.gov.

You can find information on the makes and models included in the current and previous recalls at the Consumer Product Safety Commission’s hoverboard information center.

I would be very careful that ALL your electronics are UL certified and tested. I would not think of using something that wasn't tested. Therre is a great guide to buying hoverboards online at http://bit.ly/buyers-guide-jd