Here is the backstory on this big cat in hiding—actually an African lion statue—and an intriguing mystery on how he got his voice.

“The lion has been there for approximately a year,” said “lion-tamer” and homeowner Donna M. Wallace. “The motion detector device—about a month.”

The motion sensor triggers the roar along the path at the location known only to area residents. 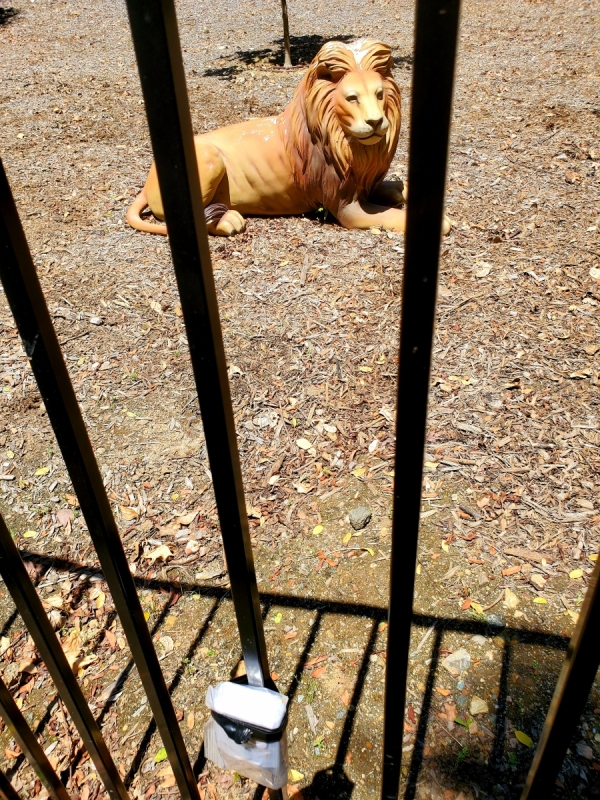 “There are easily over a hundred people that travel the path daily - pedestrians mostly, and some bicyclists, rarely motorcycles,” said Wallace.  “We do NOT mind having neighbors using the path because all have been respectful, appreciative and it has been a great way to meet fellow neighbors.   We do not want to publicize it outside of the community, however.”

Some might be happy to know the statute did not come from the Tiger King zoo. Different sort of big cat.

“The lion was purchased online about 15 years ago, for $200, as a Mother's Day gift to me I am a fan of big cats,” she said. “After many years of being located in the play room on `borrowed time’,  during a family discussion, rather jokingly, we came up with the idea of putting the lion in the backyard near the fence along the path.”

Fun idea but there was a trickster in the neighborhood--and that is where the mystery of the motion detector device that roars every time it is set off, came from.

“My sister, Brenda, put something on the Next-Door app inquiring about who put the devise up,” said Wallace. “Still a mystery, no admission yet.”

Some have been surprised by the roar when they walk or ride by the lion.  The lion statute is behind a metal fence.

But for most, that surprise has turned into fondness for the backyard treasure that has become a neighborhood secret enjoyed by those in the know.

The mighty lion remains un-named.  Perhaps that will change down the road.