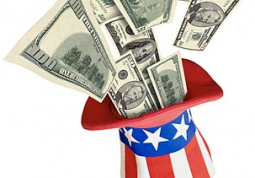 October 12, 2015 (Washington D.C.) – Virtually every candidate vying for the White House is calling for tax reforms. But their definitions of “reform” are radically different.  Some would slash taxes and cut services, others would raise taxes but expand services. So who benefits and who loses under the various proposals—and just how would they be paid for?

Donald Trump recently unveiled a plan that he claims will provide “major tax relief for middle income and for most other Americans,” a plan he says will grow the economy.   But while it’s true he would expand by 5% the number of lower income people paying no taxes at all (for those earning $25,000 a year or $50,000 for a couple), the biggest beneficiaries will be corporations and the ultra-wealthy, including Trump, a billioniare, and his business ventures, multiple experts from both conservative and liberal tax analysis organizations have concluded.

Trump’s plan would slash the top tax rate for individuals from 39.6% to 25% and cut the top corporate tax rate from 35% to 15%.  He also wants to eliminate all inheritance tax, which presently only applies to estates worth over $5.4 million.  Republican candidate Rand Paul also favors eliminating the inheritance tax.

In theory, cutting taxes for corporations and the wealthy could stimulate economic growth, freeing up money for businesses to invest in hiring more workers and expand their businesses.  Or the wealthy could simply spend more on indulgences such as yachts, travel and mansions. Or the result could be somewhere in the middle.

But cutting taxes also guts revenues  for the federal government that are currently spent on budget items ranging from defense to domestic programs. Eliminating the estate tax alone would take $246 billion – a quarter of a trillion dollars, out of federal coffers.  In addition, his plan would get rid of a 3.8% surcharge on capital gains taxes for investors – a tax set up to fund the Affordable Care Act’s subsidies for low and middle-income Americans.

Thus far, Trump has been vague on details of how he might pay for those tax cuts – does he plan to slash government spending on things like Medicare and Social Security? Or impose new fees or taxes to offset some of the cuts?  Nobody knows; thus far  he’s suggested taxing hedge fund managers on transactions and imposing a 10% tax on corporate money overseas, but the Congressional Budget office estimates that the latter would save a paltry $17 billion over ten years—a proverbial drop in the budget compared to the federal revenues he wants to slash.

Trump also says he won’t raise the deficit, which creates substantial doubt over whether he could achieve what he claims. Bloomberg commentator Al Hunt has called Trumps plan “a total fraud” since Trump has also pledge to increase defense spending.

Other leading Republican candidates have many similar themes to the Trump plan.

Florida Governor Jeb Bush has proposed  tax cuts if he is elected president that could cost America up to $3.4 trillion over a decade. Like Trump, Bush says projected economic growth would offset this loss, though that growth never materialized after his brother, George W.Bush, sharply cut taxes for the wealthy and corporations.  Under the Bush plan, middle income households would get less than $1,000 in cuts but the richest one percent would receive over $80,000 in tax cuts.  Marco Rubio has called for the complete elimination of Capitol Gains taxes.

At the polar opposite end of the spectrum from Trump and Bush, Vermont Senator Bernie Sanders, a self-proclaimed democratic socialist, has rolled out plans  for the largest U.S. peacetime expansion of government services –and he wants to pay for them  by increasing taxes on the wealthy and on corporations that offshore their assets.  “If you are very, very wealthy…you’re not going to continue to pay an effective tax rate lower than middle class people,” Sanders said recently on Meet the Press.

Specifically, Sanders wants to adopt a Medicare for all healthcare plan that would provide free healthcare to all Americans under a single payer system.  Sanders also aims to invest $1 trillion in infrastructure, creating an estimated 13 million  jobs to put Americans to work repairing crumbling roads and bridges. In addition, Sanders wants to offer a college education free to all qualifying students.

The Wall Street Journal faults Sanders plan, claiming it could potentially cost $18 trillion, including $15 trillion for  the healthcare component alone.

But The Washington Post has criticized the Wall Street Journal’s analysis, noting that Americans are already paying for many of the things Sanders want to make free – but in other ways. For instance, instead of paying hefty insurance premiums  or college tuitions, those costs would be borne mainly by higher income Americans through tax increases under the Sanders plan  and would not necessarily increase the deficit, though Sanders has not yet disclosed all the details in how he would fund his healthcare plan.

Is it worth paying more in taxes if you never have to spend another dime on health insurance premiums, deductibles or doctor visits?  Only voters can make that decision, and of course there are also questions on quality of care and other concerns. One indisputable fact, though, is that every single nation that has adopted a single-payer healthcare system  have dramatically lower healthcare costs overall than the U.S. Still, selling the idea of higher taxes -- even if it means free college, healthcare and better roads,would be a tough sell in a country where "no new taxes" has become a pledge taken by most prominent Republican candidates.

But even if Sanders wins the presidency, he would face a tough uphill battle to get his proposals through Congress, particularly if Republicans retain control of both the House and Senate.

In contrast to Sanders’ sweeping proposals, his principal rival, Democrat and former Secretary of State Hillary Clinton, has proposed far more modest programs that would cost an estimated $650 billion – less than $1 trillion, over 10 years, according to the Wall Street Journal.  Clinton aims to spend money to make college more affordable in the wake of soaring tuitions and has also indicated support for subsidized child care.

The Clinton plan would reform capital gain through a sliding scale on investments, with certain short-term investments taxed at a higher rate than now. But the top tax rate on long term investments would drop from 39.6% to 24%. Her plan has drawn favor from  some Wall Street and major financial institutions.   The Congressional Budget Office has reported that over two-thirds of the benefits for lower rates on capital gains and dividends will benefit the richest 1%, leading some progressive Democrats to criticize Clinton for not doing enough to tackle what Sanders calls “the wealth gap.”

Clinton does, however, support raising the minimum wage to help working families and is a staunch union backer.  She also supports tax credits for businesses that hire apprentices and supporting incentives that encourage corporate profit-sharing with employees.

As for the federal deficit and national debt, candidates differ sharply on these points as well. Sanders faults administrations that launched costly wars in the Middle East without a plan to pay for them, as well as past tax cuts favoring the wealthy for running up the nation's debt, while conservative candidates have faulted spending on social programs and environmental causes; many seek to  reduce spending for everything from Social Security to national parks.

There are currently over a dozen Republican contenders as well as five Democratic candidates –perhaps six, if Vice President Joe Biden announces intent to run, as he has indicated he is considering.  Some candidates, notably Carly Fiorina, have not yet released any specific tax proposal, while others have made only vague statements.  Our story has focused primarly on candidates polling prominently in both parties, who have also released a detailed tax proposal for voters to assess. Our coverage relied on mainstream media outlets, a prominent business publication, the nonpartisan Ballotpedia, candidates' own statements, and two tax analysis organizations--one conservative and one progressive.

For more information on candidates’ tax plans, check these sources: