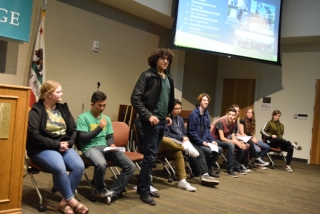 March 5, 2019 (El Cajon) - There’s a secret that I feel it’s my duty to divulge to other grandparents and parents of high school students.  High school sophomores can get a jump on their college educations—maybe even save their parents a bundle of money —by applying to Grossmont Middle College High School for the upcoming fall semester.

I know because two years ago I successfully encouraged my grandson Shor to transfer from Patrick Henry High School in the San Diego Unified School District to this special program for high schoolers that is right on the Grossmont College campus.  In June, Shor will be graduating from high school and at the same time—well actually one day before his high school graduation—he will receive an AA degree with honors from Grossmont College.

So, when he enrolls in a four-year university (we’re still waiting to learn which one), he’ll have enough units to be considered a junior, notwithstanding the fact that he is just graduating high school.

The way it works is this: Grossmont Middle College High School accepts 38 students for its junior class and 38 students for its senior class.  Students in each of these high school grade levels take back-to-back courses in English and History over a span of approximately three hours.  In addition, they take a minimum of 6 college units per semester, for which they obtain full college credit.  If they’re ambitious, they may take even more classes, up to 11.5 college units per semester.  They also are required to intern in paid jobs or as volunteers for 70 hours per semester.

Combining his college classes with Advanced Placement classes that he took as a high schooler, Shor will complete between 67 and 70 units of college work, meeting all the requirements for an AA.

On Monday night, Grossmont Middle College High School hosted a panel discussion featuring 10 students, most of them seniors, who told of their experiences taking college classes while still in high school.

They were asked how they felt about leaving their old high school—in which they took 9th and 10th grade classes—and starting anew on the Grossmont College campus.  One junior said that some of her friends at her old school were angry with her for leaving, which she regrets, but added that in the final analysis students need to do what is best for their own careers.  At Grossmont Middle College High School, she said, her new peers placed greater emphasis on learning and to her mind were more mature.

Other students answered that the ability to earn college units—in essence to get a head start on college—was a deciding factor.

With only 38 students in each high school grade, students get to know their teachers, counselor, and each other very well.  The teachers work with them on their college applications. The camaraderie among all of them was evident during the presentation.

Grossmont Middle College High School classes are the equivalent to honors classes at other high schools.  The school is anxious to maintain its reputation as one that produces students who are more than likely than others to be successful at university.

Some of the students already have received acceptance notices for next year.  A senior who wants to become a nurse was accepted at the University of Washington.  Another senior, who is interested in political science, has won a scholarship to the University of Pennsylvania, one of the Ivy League colleges.

Applications for Grossmont Middle College High School are due March 22.  You may access the application form by clicking here.

I can't help question of why the push or hurry. America is overloaded with graduated high school students that haven't mastered English, American History, Civics and more. Administrators and unions have done a great job of accomplishing this situation. Who is measuring the level and success of today's education?