Roger Coppock contributed to this story

September 8, 2019 (San Diego’s East County) -- Extreme heat is poised to rise steeply in frequency and severity over the coming decades, bringing unprecedented health risks for people and communities across the country. That’s the disturbing finding of the Union of Concerned Scientists in a just-issued report titled Killer Heat in the United States: Climate Choices and the Future of Dangerously Hot Days.

The article includes an interactive map where you can look up heat wave forecasts for your Congressional district. Here are San Diego’s five districts:

The forecasts, if accurate, are sobering.  You may want to grab a cold drink before reading just how hot scientists say it will get in your community. Here are some local examples:

Duncan Hunter’s 50th Congressional district, which includes a broad swath of East County communities such as Alpine, Santee, and Lakeside  had 57 days a year over 90 degree historically but is forecast to reach 93 days by midcentury and 122 days by late this century. Best case scenario, if dramatic action is taken to reduce greenhouse gas emissions, that might be held to 87 days by late century.  Similarly by late century, the district is predicted to have 60 days over 100 degrees (up from just 14 days now) and 35 days over 105 degrees (nearly 9 times more than the four days a year at those high temperatures historically).

In Juan Vargas’ district, which includes the southern part of San Diego county as well as deserts in Imperial Valley, the outlook is even more grim.  By late century, unless warming can be limited to 2 degrees centigrade, the 51st district is expected to have 168 days over 90 degrees, 119 days over 100 degrees, and 93 days over 105 degrees.

Susan Davis’ 53rd district which includes La Mesa, Chula Vista and some San Diego neighborhoods, would have 90 days a year over 90 degrees by late century, up from just 12 in the past. Historically, her more temperature district had no days over 100 degrees, but is forecast to have 29 days over 100 degrees and 13 over 105 degrees. 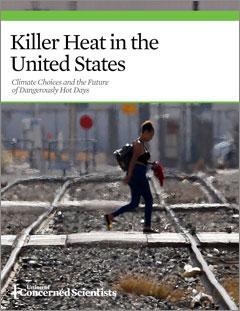 Similarly, Scott Peters 52nd district which had only one day over 100 degrees historically  and just 13 days over 90 is predicted by century’s end to have 81 days over 90, 28 days over 100 and 13 days over 105 degrees---unless the world takes major actions, which could still only partially mitigate climate change that can no longer be completely reversed, according to the scientific experts. But in Peters’ San Diego district, mitigating measures could limit the days over 90 degrees to 38 a year, and keep the sweltering days over 100 and 105 to just 5 days and 1 day respectively.

Hand-in-hand with dramatic climate change fueling warming would, of course, come a rise in devastating wildfires in hot, dry and brushy areas such as San Diego’s inland region.

You can learn more in this overview published in Popular Mechanics:

At the local level, the County and city of San Diego as well as most East County communities are making efforts to combat climate change by adopting climate action plans, planting trees, promoting new housing near transit lines, converting municipal vehicles to non-polluting fuels, and moving toward adoption of community choice options to purchase electricity from renewable resources such as solar, wind and geothermal. California is also taking a leadership role in promoting policies to address climate change, as are most nations around the world.

But the United States, one of the world’s largest producers of greenhouse gasses that accelerate climate change, has under the Trump administration pulled out of the Paris climate accord and implemented numerous policies that roll back gains made under prior administrations, even pushing for increased fossil fuel extraction in Alaska where Arctic ice and melting permafrost are already occurring at alarming rates, as well as increasing reliance on coal and gas that pump GHG emissions into the atmosphere and rolling back fuel efficiency standards on products ranging from light bulbs to vehicles. The Trump administration has also taken steps to open vast tracts of national forests to logging, eliminating thousands of trees that help absorb C02.