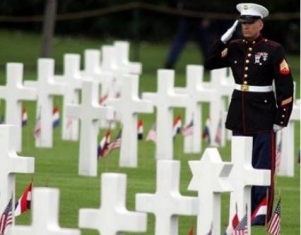 May 30, 2016 (San Diego) -- Today is an appropriate time to talk about our military members, their families and veterans – and what our local members of Congress are doing to help them and to impact our men and women in uniform.

This week, an organization called Blue Star Families came out with a report on challenges facing military spouses. That report found that 43% of military spouses are not working and another 35 to 40% are under-employed compared to their level of education.  This predominantly affects women, since around 90% or more of military spouses are military wives—over half a million of them.   That negative employment situation is costing society as much as a billion dollars.

Congresswoman Susan Davis, a Democrat who represents San Diego and portions of East County, says the Blue Star Family shows why we need an economy that leaves no one behind.  As a member of the House Armed Service Committee, she has fought for legislation to help military families and veterans including authoring or coauthoring legislation to make it easier for veterans to buy homes, get a college education, aid homeless veterans, study the impacts of long deployments on children, and train dogs to help vets suffering from PTSD.

Most recently, her law allowing women military pilots to be included at Arlington National Cemetery was signed into law by President Barack Obama this month. During World War II, a select group of young military women were trained to become pilots; the first female military pilots in history.  Over 1,100 women volunteered for this position, but their stories went relatively untold until 2010 when Congresswoman Davis coauthored legislation to honor them with the Congressional Gold Medal and now with her new bill, assure that these Women Air force Service Pilots, or WASPS, share a place of honor alongside male veterans in Arlington.

Congressman Juan Vargas, a Democrat whose district includes the southern portion of San Diego County, introduced HR 4753, the Wounded Warrior Housing Reform Act of 2016 in March.  It would make it easier for disabled veterans to qualify for housing assistance programs offered by the Dept. of Housing and Urban Development, or HUD.

Representative Vargas says, “The brave men and women who have served our country, deserve the respect of our government, and our nation. We need to remove the obstacles that stand in the way of our veterans receiving the benefits they earned, starting by ensuring that they have a roof over their heads. “

Congressman Duncan D. Hunter, a Republican also on the House Armed Services Committee, is a veteran of the Iraq and Afghanistan wars. He says he has worked to reduce the backlog at VA facilities.

He has recently introduced a bill that would outlaw child rape and other human rights violations on U.S. military bases worldwide and he went to bat to prevent the Army from booting out a Green Beret sergeant who forcibly removed an Afghan police commander who confessed to abusing a young boy on a U.S. military base.

Hunter has opposed the inclusion of women in combat roles in the military and in protest, recently introduced a bill that would mandate drafting women.  He calls it “irresponsible” to change the way America fights its wars adding “It’s unfortunate that a bill like this even needs to be introduced.  And it’s legislation that I might very well vote against should it be considered during the annual defense authorization process.”

Congressman Darrell Issa, a Republican representing North County, as former Chairman of the Oversight and Government Reform Committee, convened hearings to question and examine the backlog of veterans’ claims at the Veterans Affairs Department and worked to improve facilities for military members and their families at Camp Pendleton.

Congressman Scott Peters, a San Diego Democrat, since coming to Congress helped pass the  VA Accountability Act to improve services and care for our veterans, the Clay Hunt Suicide Prevention Act to improve mental health care, and the  Veterans Choice Act to let our veterans access care outside the VA if their local VA is not sufficient. But he adds, even with this progress, there is more work to do for our veterans. He also wants to help military families. His goals include:

REMEMBER: If you are able, Save for them a place Inside of you. And save one backward glance When you are leaving for the places they can no longer go. Be not ashamed to say that you loved them, Though you may not have always. Take what they have left, And what they have taught you With their dying And keep it your own. And in a time When men decide and feel safe To call war insane, Take one moment to embrace Those gentle heroes You left behind. . . . Written by Major Michael Davis O’Donnell, helicopter pilot; 1 January 1970, Dak To, Vietnam; KIA on March 24, 1970
follows from poor treatment in the service, including forced participation in wrongful politically-motivated never-ending (and losing) wars. The suicide rate is high in service as well as with veterans, and recently in the Marines two-thirds of suicides concern Marines who have never deployed. The whole system is rotten, so it doesn't help to make minor corrections. . . .Regarding low spouse employment, it's because military life is inherently unstable with frequent relocations.