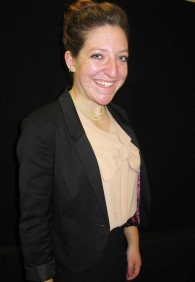 June 19, 2012 (San Diego)--Recently I won a $48,000 scholarship funded by STOP2011, a Heartland Coalition project. This number represents more than a weight off my chest for college, however. It is the amount of debt each American owes if the United States national deficit was divided by the number of our citizens.

As I began my college search in the beginning of my senior year, I simultaneously began researching scholarships as I watched the costs of school rise with our decreasing educational budget. In November of 2011 I stumbled upon the STOP2011 website, with a scholarship available to all San Diego seniors.

STOP2011 is a project of Heartland’s Project Destination.  The scholarship is funded by Jim Hester, a Heartland board member. The idea behind the project is to educate citizens about the effects our national debt has on young people-- and the crippling consequences of our future if we do not take action now.

The application consisted of an essay, with a prompt that seemed all too fitting: “Why the Debt Matters to Young People.” I was struck by the relevance of this cause, and submitted an essay detailing the burdens young people will face with the tremendous deficit highly prevalent in our future.

Soon afterwards I was notified that 25 out of 150 students who had applied had moved on to Round Two, myself included. Round Two consisted of writing a letter to the editor of the Union Tribune responding to an article about President Obama’s State of the Union Address.

We were asked to specifically concentrate on whether Obama had focused on the issue of the debt enough, a target that I did not see was met.

That was the easy part. With 10 people remaining in Round Three, we were given another prompt: “How the Debt Affects Young People.” Our response consisted of a three-minute speech.

As we gathered in the Merrill Lynch building downtown San Diego in mid-April I could sense the nerves rattling around the room, and yet I felt a sense of companionship with the other contestants. We had strived to get to this point and I felt fully supported as I made my way to the podium in front of esteemed San Diego lawyers and judges who had volunteered their time to score our presentations.

I chose to approach this prompt from a unique angle--focusing on the psychological effects the debt will undoubtedly have on young people. Burden of the debt may induce stress, putting some individuals are at a much higher risk for life threatening diseases, such as heart attacks and cancer.

After a nerve-wracking three minutes and 26 seconds the speech was over, and finalists gleefully advanced into Round Four:  a debate. Preparing for the debate consisted of numerous late nights at the kitchen table, attempting to make sense of our fiscal situation and the politics surrounding it. I found myself further exploring my liberal roots, and our country’s history in regards to dealing with financial crises. I adopted a Keynesian approach and drew upon historical facts from The New Deal in the early 1930’s.

The next day I received an e-mail informing me that I had won. While I was not only hugely grateful for the college funding, the knowledge I gained through this experience was priceless.

Through this experience I was given the opportunity of an internship writing for the East County Magazine, which is sponsored by the Heartland Coalition. I look forward to spending my summer interning, and then in the fall attending Humboldt State University. I plan on studying psychology and political science.

As I think about my search nearly a year ago for scholarships my advice for students is to find something you are passionate about, and to let that passion show. Being able to fully invest yourself in all your endeavors will surely pay off in the end.