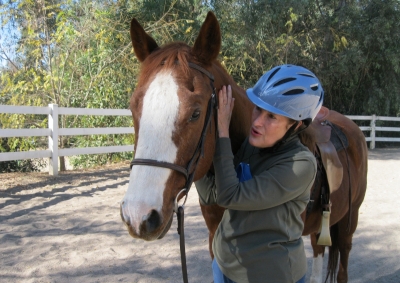 By Mimi Pollack
January 22, 2021 (El Cajon) -- 2020 was a strange, difficult, and even transformative year for so many. In my case, the pandemic made me feel very mortal and I decided to start checking things off my “bucket list.” First up was going back to horseback riding after 20 years of not riding or being in the horse world.
I searched on the internet and found a place in Crest named Hidden Fox Farm. That led to emails between the owner, Katy Boswell, and myself, and a date for me to see if I could overcome my fear since the last time I went horseback riding, I had a bad spill. 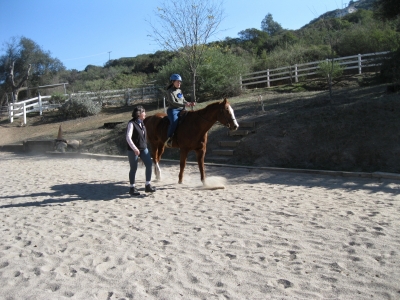 Hidden Fox Farm turned out to be a peaceful place with a good vibe. The horses there as well as the resident goats are well taken care of. Katy introduced me to Charger and I was smitten. Charger is a chestnut Quarter horse with expressive eyes and a friendly personality. As Katy said, “He has a bit of mischief in him, but is usually quiet, patient and steady,” perfect for someone going back to square one. 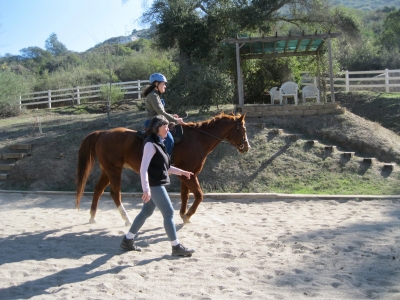 I was still hesitant though and needed a teacher with patience.  Fortunately, Katy had the right person for me, her long-time friend, Kathi Murphy. Both Katy and Murphy [as she is known in the horse world] are accomplished horsewomen who have been riding since they were very young. Murphy took me under her wing and has given this rusty rider several horseback riding lessons. My goal is to find my balance, trot and canter. 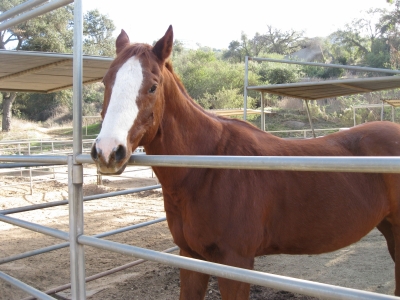 During the lessons, in-between commands, Murphy told me a little about herself and I realized that she had an interesting story to tell. She is someone who worked hard from the time she was 12 and at the age of 55, was able to retire from her government job and jump full time into her passion job, working at Hidden Fox Farm, giving lessons and exercising horses. The pandemic brought her to a second act of working with horses after a first act of working with firefighters 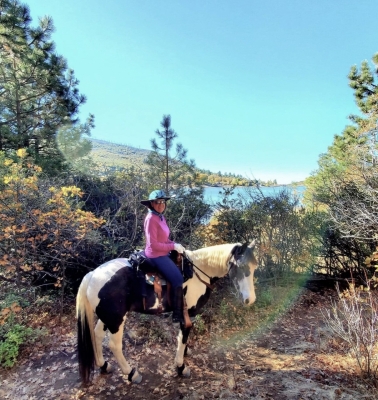 Kathi Murphy was born in California and her love affair with horses began when she was a young girl. After high school she went to both Cuyamaca and Southwestern College. She worked for 31 years, first for the San Diego Police Department and later the San Diego Fire Department. She started doing clerical work and quickly worked her up to a human resource analyst. One of her duties with the fire department was determining eligibility and background investigation for incoming fire fighters. She also notified them when they were hired. She is proud of the hard work she did and being able to let 700 fire fighters know that they got the job.
However, she was also happy to retire in May 2020 and move on to working with Hidden Fox Farm along with enjoying her rural life at her home in Pine Valley, where she lives with her husband, Gen, and her dog, Emma. She has a 19-year-old Tennessee walker named Cloud, who she says is the best trail horse ever.
Murphy has been a wonderful teacher, not only showing me how to ride again, but also how to tack Charger up, etc. She thinks Charger is a good horse for me, too.
The pandemic has changed the lives of so many, and for some it has been very difficult. Fortunately though for all the darkness, there has also been light. For Murphy, it was a catalyst to move on to a fulfilling second act. For others, it was finding ways of helping and giving back.  Finally, it was the push I needed to check things off my bucket list. So far, I have gone back to horseback riding and donated blood for the first time. I also know of folks who began to volunteer. In my case, I deliver food for Jewish Family Services to seniors affected by COVID who must stay home. I deliver to 12 homes in La Mesa once a week. Being a volunteer is one good way to combat the malaise many of us have been feeling.