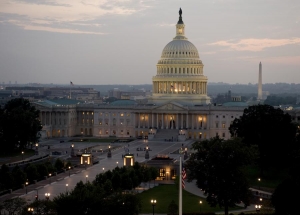 May 17, 2017 (San Diego) -- San Diego’s Congressional delegate and California’s Senators are voicing diverse views – and in one case, a crude response to  the firing of FBI director James Comey and a startling report by the New York Times indicating that notes by fired FBI Director James Comey reveal that President Donald Trump  first asked Comey to shut down a federal investigation into fired national security advisor Michael Flynn over his Russian connections, but Comey refused to do so.  (See ECM special report.)

The briefest response came from San Diego Republican Congressman Darrell Issa.   Politico reports that when asked about the news by a Politico reporter,  Issa “looked her in the eye, gave her the middle finger and walked away.”  Issa won reelection by a very narrow margin in 2016 and his seat is considered vulnerable in 2018.

Senator Kamala Harris (D-California) posted on Twitter, “We are well past the tipping point. When will the GOP put country over party?” while retweeting the New York Times story.

Senator Dianne Feinstein (D-California) has called for Judiciary Committee hearings on the firing of Comey, according to a press release issued May 13.  ““This is a very serious matter, with significant implications for the rule of law and the strength of our democracy. The American people need and deserve the truth about the firing of the FBI Director and its effect on the investigations in Russian interference in the 2016 presidential election,” said Feinstein.  She also cited Trump’s admission on NBC TV that the Russian investigation was a factor in firing Comey, and Trump asking Comey if he was a target of investigation, then demanding a loyalty pledge, as inappropriate and raising constitutional concerns. As for Trump asking Comey to shut down the Flynn investigation,  Feinstein told Associated Press that  Comey needs to come to Capitol Hill and testify.

Susan Davis (D-San Diego), whose district includes parts of East County, tweeted, “When will enough be enough for my GOP colleagues? They’re key to having an independent investigation.”

Congressman Duncan D. Hunter (R-Alpine) published an editorial today in USA Today titled “Let President Trump try to work with Russia.”  It does not reference allegations of Trump seeking to stop the Russia investigation, but does allude to criticisms of Trump for leaking classified information to Russian representatives at the White House days ago amid the brewing controversy over White House cozy ties to Russia.  Hunter’s editorial reads in part, “President Trump is under assault for his posture toward Russia and Vladimir Putin. This is true even as American presidents are fully within their prerogative to establish working relationships with world leaders, and President Trump most certainly deserves the same opportunity.”

Scott Peters (D-La Jolla),  stated Tuesday, “This morning, in response to reports that President Trump gave classified intelligence information to the Russians, I called on Republicans to put country first. That need has never been more dire than today. It’s time to put politics aside and work together to investigate the ties between President Trump and Russia and to find out whether he has obstructed justice,” KQED reports.