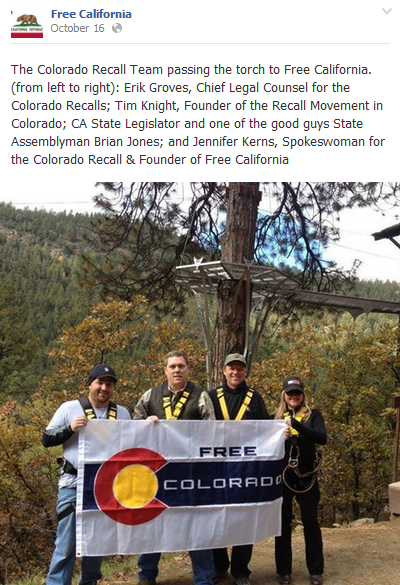 On October 26, the Washington Post also reported that East County's Republican Assemblyman Brian Jones is a backer of the effort to recall his colleagues. That story stated, "Republican Assembly members Tim Donnelly, Brian Jones and Shannon Grove will help spearhead the recall initiative."

But on November 6, Jones' staff contacted ECM to insist that his position had been misrepresented.  The staffer directed us to an n an October 26 interview with the U-T San Diego, in which Jones denied backing the recall.  "“I support the people’s opportunity to recall legislators,” Jones said. However, he added, “I never agreed to specific people. I never agreed to a specific game plan.” Asked directly whether he would support removing Hueso and Gonzalez, Jones said: “I’m not going to say they should or should not be recalled. It’s not up to me. It’s up to the people of the district.”

The measures were introduced to stem rising gun violence and to protect wildlife from lead poisoning.

“I stand by my vote record which is consistent with the views of the majority of my constituents who support common-sense changes to gun laws that do not erode Second Amendment rights. My contributions in the Assembly and the Senate will provide reasonable protections for safer communities in California which will help curtail senseless gun violence in our state.”

In a letter to supporters, Gonzales, who represents the 80th district, wrote: "First, I support the Second Amendment rights of responsible gun-owners, but as a mother, I have supported reasonable efforts to curb gun violence in our communities. The gun lobby has long-opposed even the most common sense efforts to prevent the violence we unfortunately see all over my district and they will undoubtedly be instrumental in funding any recall against me.”

She also suggested an ulterior motive to oust minorities, noting that all of the candidates targeted are Latinos.

Among the people spearheading the effort is Assemblyman Jones of the 77th District representing Santee.  Jones was against the legislation even when it was in committee. He also asked Governor Brown to veto legislation that would ban lead bullets.

Jones wrote to the Governor that this legislation was ““bad public policy for many reasons, one of the most significant being that it would place a de facto statewide ban on hunting, due to current federal impediments on the production and sale of alternative ammunition.  What’s more, considerable concerns have been raised about the scientific information distributed by the proponents.  Our own Fish and Game Commission considered data regarding the “lead” regulation as not conclusive.” http://arc.asm.ca.gov/member/AD71/?p=pr

Moreover , Californians overall agree with further controls and gun legislation. In a Field poll  conducted back in February it was found that California voters strongly support several specific gun-control measures proposed by the state Legislature and Congress. An overwhelming 83 percent of voters support providing more money for efforts to take guns away from convicted felons; 75 percent support requiring anyone buying ammunition to first get a permit and undergo a background check, none of which is required now; and 61 percent support putting higher taxes on ammunition, with proceeds going to violence prevention programs.

Moreover, 61% of Californians polled said that they favor  more gun controls, with only 34% were more concerned with Second Amendment rights to bear arms.  http://www.mercurynews.com/ci_22666985/field-poll-california-voters-feel-new-gun-controls   Thus the recall organizers have a tough road to hoe.