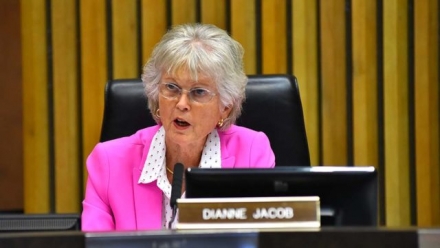 Photo:  County Supervisor Dianne Jacob renewed her call for the program in her State of the County speech early this year. Photo by Ken Stone

October 15, 2019 (San Diego) - Joining San Diego and cities around the region, the Board of Supervisors voted 3-2 Tuesday to establish a community choice energy program in the county’s unincorporated areas.

“This is a huge victory for consumers who are sick and tired of getting ripped off by SDG&E and are hungry for an alternative,” said Supervisor Dianne Jacob, board chairwoman. “Ratepayers will finally have the freedom to choose where they get their energy.”

County leaders said the initiative would bolster the use of renewable energy and cited a recent study estimating it would save 179,000 residential and business ratepayers $12 million a year.

The county is looking at a 2022 launch date and is talking with officials in Carlsbad, Del Mar, Solana Beach, Santee and other local governments about a possible joint choice initiative.

The program includes a key environmental goal: By 2030, at least 90% of the energy provided is expected to come from solar and other sources of renewable power.

A recent study done by a consultant for the county predicted that utility rates for those tapping into the program would be at least 2% lower than what SDG&E is expected to charge.

The study estimates the program will save ratepayers $12 million annually during the first decade of operation.

About 20 community choice programs exist in California. San Diego, Chula Vista and several other local cities are preparing to launch their own initiatives.

Jacob, a longtime supporter of community choice, renewed her call for it in her State of the County speech early this year. She also announced that Fletcher was joining her in the effort.

Would be nice if the board of supervisors consider the viability and permitting of stand alone home power generation. Current regulations require connection to SDG&E (the grid). Allowing homes to become grid independent would bolster San Diego County readiness during unavoidable power outages due to wind, earthquakes, or "technician" errors https://en.wikipedia.org/wiki/2011_Southwest_blackout. Allowing grid independent installs would also reduce the number of eyesores along our country roads, make families "greener" and more power responsible, spurring the economy in many different ways by keeping the money in the pockets of homeowners, reducing the ability of North Korea et al to hack our grid (read the new and very weak security standards for grid tie inverters) and reduce the number of wildfires from overhead lines. In this day and age it just makes good sense. The technology has matured to allow rural electrification without the rural distribution eyesores.