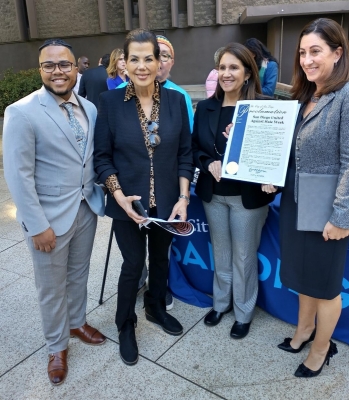 The event was spearheaded by San Diegans United Against Hate, a coalition of anti-defamation groups and other community organizations, such as San Diegans for Gun Violence Prevention, appalled by the increase in the number of hate crimes committed in San Diego.  Mayor Gloria said that hate crimes have increased by 17 percent. 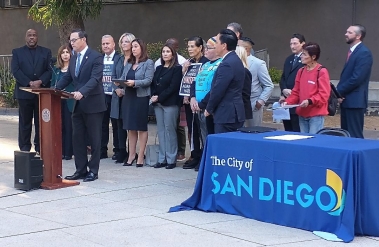 D.A. Stephan ran down the list of victims of hate crimes, including people of color, ethnic and religious groups, immigrants, and refugees, among others.  U.S. Attorney Grossman stated that his office handles anything from “online harassment and verbal assaults to attacks on our houses of worship, and hate crimes.”  The result, he reported, is to instill fear in our communities, disrupted communication, and in the worst cases, vandalism and mass murder.

The Proclamation shows that San Diego stands with other California cities by recognizing the effects of hate and hate crimes on urban and outlying communities.  The theme was that together we can create a hate-free San Diego. 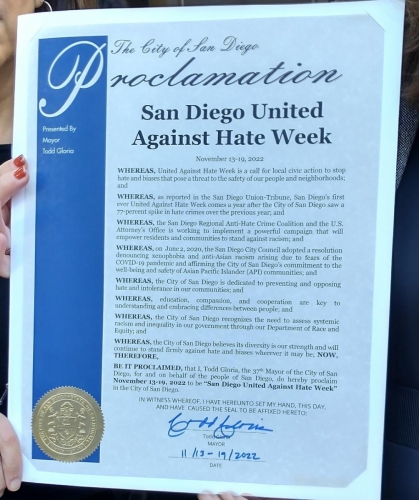 Earlier the same morning, another press conference was held to inform San Diegans about events to celebrate the Season of Peace.  Attended by community activist and organizer of Season of Peace, Bishop Cornelius Bowser, San Diego City Councilmembers Elo Rivera and Monica Montgomery Steppe. District Attorney Summer Stephan, and members of San Diegans Against Gun Violence.  Montgomery Steppe told the crowd that, “Justice and peace are never found on the other end of a bullet.”