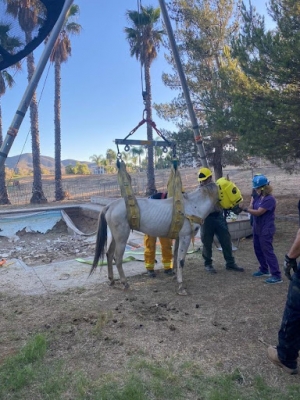 September 23, 2022 (Jamul, CA) -- A young horse named Shocker is safe this morning, after somehow getting into his owner’s empty pool in Jamul on Wednesday.

“Shocker’s owner tried to build a ramp to get him out, but was unsuccessful,” says Nina Thompson, director of public relations for the San Diego Humane Society.

So San Diego County’s Department of Animal Services responded to the residence in the 13,000 block of Proctor Valley Lane and called San Diego Humane Society’s Emergency Response Team for help to rescue the horse.

Members of our team assembled and set up their rescue tripod, in order lift the horse up. They also placed a protective helmet on his head, to limit his vision and keep him calm. A veterinarian was on standby to ensure Shocker was doing well through the rescue.

“After about three hours, Shocker was back up in the grass, uninjured, where he belongs,” Thompson advises.”We are so glad our Emergency Response Team was able to help!