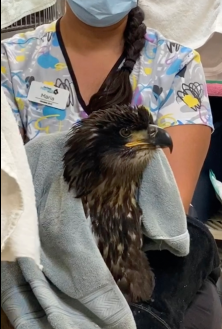 Updated July 5, 2020 from Nina Thompson at Project Wildlife: The juvenile bald eagle, which has not yet developed its white head feathers, is now standing on its own and accepting food.

July 4, 2020 (Alpine) – Our national symbol, the Bald Eagle, is rarely seen in San Diego County, where only a handful of nesting pairs have been documented.  Today, as our nation celebrates Independence Day, local wildlife workers are fighting to save the life of one found in the Alpine area in hopes of helping  the large raptor regain its indepedence.

“On this July Fourth holiday, San Diego Humane Society’s Project Wildlife admitted a Bald Eagle.The magnificent bird was rescued and brought to us by SoCal Parrots, after it had been observed on the ground for a couple of days at Barrett Honor Camp,” says Nina Thompson, Interim Director of Marketing and Communications for the San Diego Humane Society.

The Bald Eagle is dehydrated, has been given fluids and  has also been treated for mites, Thompson writes in an email to ECM.

“While the prognosis is guarded, the bird’s condition is stable in the critical care unit our Bahde Wildlife Center.," she adds. “It is extremely rare for San Diego Humane Society to admit a Bald Eagle. We are hoping this majestic bird will respond well to our treatment, so it can be released back into the wild soon again."

In an update received July 5, Thomspon indicated the bird is a fledgling (thus has not yet developed the characterisic white head). The juvenile eagle has not been seen flying on his own. 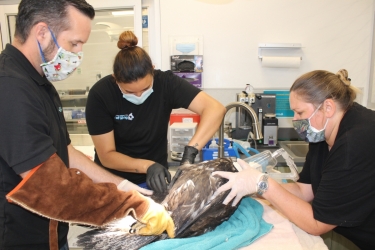 Today, the bird was sedated in the moning to undergo blood work, radiographs and a feces test for full evaluation included a lead test.  "Mites can occur at any time, but are more prevalent in a bird who is compromised," she said in response to an ECM question asking whether the bird ingested rodenticides, a common cause of neurological damage and other serious harm to wildlife including birds of prey in California.

The bird is now able to stand "stronger and brighter" and volunteers this afternoon were able to successfully hand feed the eagle, which will cotinue to receive oxygen treatments.

Asked how many bald eagles are in San Diego County, Thompson replied that "it appears that there may be 8-10.  These are nesting birds so may not be here year round." She cited as a reference the Bird Atlas of San DIegio County-Natural History Museum at  http://sdplantatlas.org/birdatlas/pdf/Bald%20Eagle.pdf