Article and Photos by Briana Gomez

June 2, 2020 (San Diego) – A crowd of about 300 people assembled at Balboa Park yesterday afternoon to peacefully protest.  Protesters laid on the grass, chanting “I can’t breathe” and “George Floyd,” referencing the brutal killing by a white police officer of a black man in Minneapolis that has sparked nationwide protests and civil unrest. 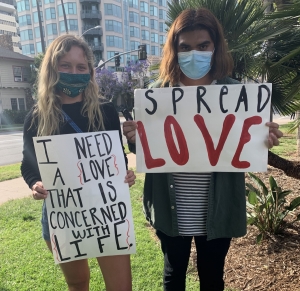 After four to five hours of peaceful protests, organizers and supporters took the megaphone and spoke to crowds about the importance of gathering in unity. Most of the speakers were Hispanic; one stated, “We want to hear black voices, too.”
Mary Stokedly said she wants to use her privilege to help others even if she has to go to the front line and stand in front of cops. “I want to use my privilege in any way that I can even if I need to go in the front, humble myself, serve, and listen” Stokedly, who is white, stated.  “This has been a huge issue for a very long time and the opportunity to come out and protest recently has been very beautiful.” 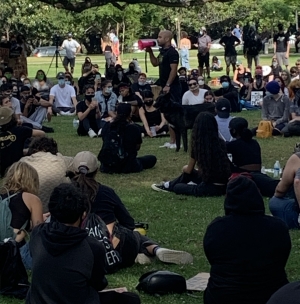 Stokedly came to this event with friend Abner Diaz. This is her first protest event recently, but she hopes to attend more.
“I wanted to show my support to marginalized people especially black people who’ve had so many injustices happen to them,” said Diaz. He added that he attended one of the downtown events the previous evening. “I want to show my support in anyway that I can to those who feel like they don’t have a voice.”
Diaz and Stokedly heard about this protest through friends on social media.
Diaz mentioned that the downtown event started peacefully, however a curfew was imposed in an effort to prevent vandalism and looting that has occurred following some recent protests. 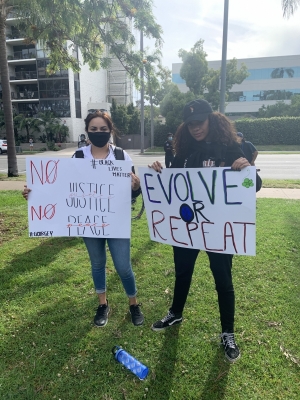 A crowd member at the Balboa protest shouted, “if you see someone doing something wrong at a protest hold them accountable!”
At the same time, a block of protesters went toward a group of antagonists while the crowd yelled, “Don’t take the bait” and called them back into the seated area.
Police blocked in the area between 6th and Ivy all the way up to 6th and Olive.
T and Kamryn, who did not wish to publish their full names, were also at the protest. They found out about the event through the @fastlaneclothingofficial Instagram account.
They showed up with signs in support of the cause.
“All lives won’t matter until black lives matter,” T said.
“This isn’t white versus black,” Kamryn concluded. “This is we the people against the elite. We must evolve or history will continue to repeat itself.” 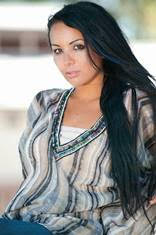 ________________________________________
Briana Gomez holds an MBA from the University of La Verne and a Bachelor of Science in International Business from Azusa Pacific University and freelances as a journalist.  She is originally from La Mesa and lived in Japan for five years in her youth. After this experience, she took an interest in travelling and learning about global cultures and cultural identities.  She first travelled to Hungary in 2013 to teach English on a gap year before obtaining her master’s degree. Appreciating the experience, she returned in 2018 to pursue journalism and research on multicultural communication.
Gomez has written for online and local publications in Budapest and in her native San Diego, including coverage in East County Magazine. She is passionate about human rights and minority issues, bringing awareness to ethnic groups in our community. She also sits on the committee for the Arab and Muslim Community Coalition and is an active member of the San Diego Arab-American Anti-Discrimination Committee and San Diego House of Lebanon.
East County Magazine thanks the Facebook Journalism Project for support through its COVID-19 Local News Relief Fund Grant Program to help  sustain reporting on vulnerable local populations and rural communities. Learn more at #FacebookJournalismProject.