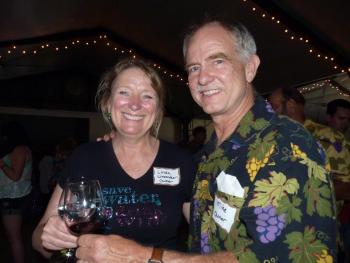 Those labors are yielding some impressive results.  At this year’s  San Diego County Fair, San Pasqual Winery picked up six awards, including a gold medal for the winery’s most popular offering, Habañera passionfruit wine. 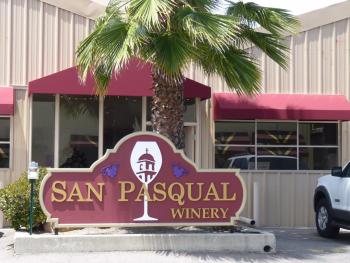 “Our Malbec won silver and was chosen as one of five Malbecs in California to represent California at a competition in France,” said Mike McWilliams, Linda’s husband.

Other awards included silver for Roselle Blanc and Passionfruit, as well as a bronze for a Rosé at San Diego County’s Fair, as well as additional awards at Orange County’s fair this year.

When not making wine, Linda works as a speech therapist.  Mike designs  controls for robots that disarm improvised explosive devices (IEDs) for the navy.   Looking forward to eventual retirement, the couple decided to get into the wine business.

They are among the pion 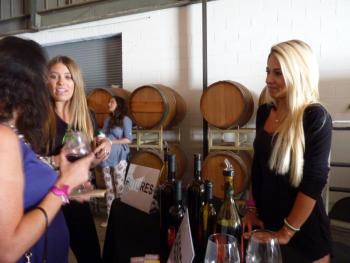 The couple sources grapes from across our region, including vineyards in East County communities such as El Cajon, Crest and Jamul, as well as from Napa, Sonoma, and elsewhere.  They purchase local grapes wherever possible, turning to outside sources for varieties not available locally.

San Pasqual Winery will continue to operate its tasting room at 8364 La Mesa Boulevard in La Mesa’s downtown village, as well as the new winery at 8140 Center Street in La Mesa.

Brenda credits “attention to detail” for the success of their wines.   She learned her craft from other wine makers as well as courses at Mira Costa College.   She’s currently completing an online wine making course offered by the University of California, Davis.

“There are people all over the world taking the course,”  the winemaker said, clinking glasses together with her husband in a toast to their success . “Amazing!”