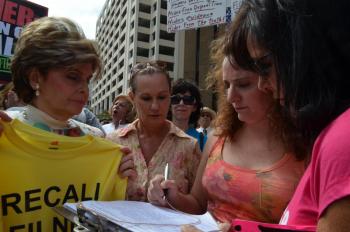 August 19, 2013 (San Diego)—Hundreds of people came to the Civic Center Plaza yesterday for a “Freedom from Filner” rally.  Michael Pallamary, organizer of an effort to recall the Mayor, spoke about the drive to get 102,000 valid signatures on a recall petition over the next 39 days.

“We started to gather the signatures at midnight at the Gaslamp,” he said. “The recall will not be involved with any candidate or political party” during the next mayoral race, he added. 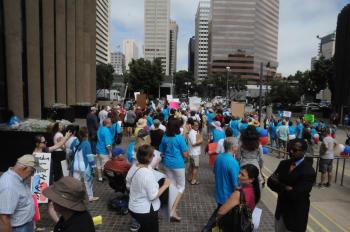 f not enough signatures are validated after 39 days, they can get an extension of 30 days to collect the remainder.

Pallamary added that thousands of volunteers are ready to fan out, from all over the County. “We got people who came down from Ramona to gather signatures.”

He insisted that controversies over multiple sexual harassment claims against Filner is damaging the region and that business leaders have told him that “they do not want to work in San Diego.”

Kathryn Vaughn opened the rally. “Bob Filner, the Citizens of San Diego have a message for you: It’s time to resign.” She added that the Mayor has brought disgrace to the city. “We the people and the citizens of San Diego want a leader who has honor, dignity and respect for all people. We stand united today and we are working together to recall Bob Filner,” she added.

She promised that the movement would be relentless until Filner steps down from office.

Dolores Chavez took the microphone and faulted unions for continuing to back the mayor.

However, Labor has distanced itself from the Mayor, and asked for the legal process to take its due course.

The Central Labor Council, through its President Richard Barrera has stated that  "The allegations against Mayor Filner are incredibly serious and, if true, demonstrate a pattern of behavior that is completely unacceptable in any workplace…Ultimately, these issues can only be resolved through the appropriate administrative and legal processes. However, the workers in San Diego have built a movement to raise their voices and make their issues heard, and that pro-worker agenda will continue regardless of the outcome of those processes." http://www.unionyes.org/labor-council-statement-situation-regarding-mayor-filner

Moreover, Lorena Gonzalez, currently a member of the State Legislature and former President of the Labor Council, has asked the Mayor to step 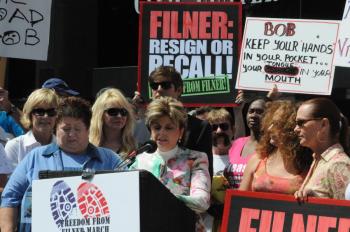 Attorney Gloria Allred represents the only one of Filner’s accusers who has filed a legal action. Allred said that this is about freedom and justice for women. Beside her stood Michelle Tyler, Katherine Ragazzino and Peggy Shannon, who have also alleged inappropriate conduct by the Mayor.

Allred quoted from the Rev. Martin Luther King’s  “I Have a Dream” speech calling for equality. The attorney stated that her dream is for all women to “be able to enjoy equality under the law.” She added, “Mayor Filner apparently you do not share that dream of gender equality. And in San Diego you have turned that dream into a nightmare.” She again asked for Filner’s resignation.

She then recounted claims made by her clients including McCormack-Jackson, the  only woman to have filed a lawsuit, and Tyler, who alleged that Filner made demands as a condition to aid her client before the Veterans Administration. Shannon, the latest to come forward, claims the Mayor boasted to her of his sexual stamina.

A handful of counter protetesters showed up including Andre, who did not provide a last name.

“They are taking a very minor thing, that should be a private issue in his office and blowing it up to get everybody behind this recall so they can get a puppet inside the mayor’s office,” he contended.

He believes efforts to oust the Mayor are backed by developers who intend to build up the marina and tidewaters, which are also sacred to the Kumeyay band of Native Americans. He directed us to the Indian Voices newspaper on native American issues.  An editorial in Indian Voices by Rose Davis reads: “The mayor wants to preserve open space, which does not make the greedy folks happy and they want to get rid of him. It’s all about money and land.”

nice to see the extreme left wing hypocrites in action.  they, especially gloria allred should be attacking the "bimbos and gold diggers and the vast right wing conspiracy" trying to being down the good progressive filner.  thats what they all said about the women and the accusations concerning bill clinton.

if all the women who spoke out against clinton are bad then so are the ones against filner.  whats the matter extreme far left hypocrites, the cat got your tongue?