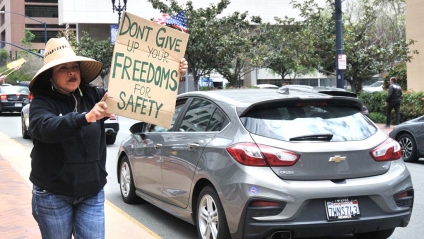 April 18, 2020 (San Diego) - Aaron Ruis of El Cajon manages an assisted-living facility for disabled adults, but Saturday in downtown San Diego he was managing crowd chants at a “freedom rally” to open the state’s economy.

"What do we want? Freedom! When do we want it? Now!” he said through a megaphone, along with cries of U-S-A and Free-Dom.

Ruis was one of 250 people standing at the corner of State Street and Broadway defying state and city bans on gatherings. Hundreds of others circled in cars past the event, honking their horns and waving American flags. 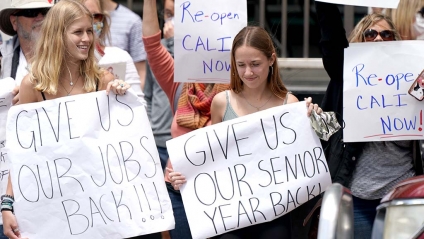 Photo, right:  Parallel signs wanted “our jobs” and “our senior year” back. Photo by Chris Stone

“A lady from my church shared the [event] information with me,” Ruis said via email after leaving the 2-hour demonstration around 2:30 p.m. “I find it important to share that in the four years I’ve known her, she has never spoken about politics. It is the unprecedented nature of this situation that has drawn many of us into this fight.”

Signs covered the gamut — from “Our Freedom Doesn’t End Where Your Fear Begins” and “I Want to Go Back to School” to “Quarantine Newsom” and “Give Me Liberty or Give Me Death.”

What led Ruis, 40, to the foot of the Hall of Justice and the Westin San Diego at Emerald Plaza?

“It is clear from our founding documents that the idea that the individual, not the government, knows what’s best for their particular situation,” he said. “In addition, the limitation on governmental powers enumerated in our Constitution, specifically the Bill of Rights, are most important during times in which the government feels they have an opportunity to infringe on those rights.”

Like others — including those calling for the recall of Gov. Gavin Newsom — Ruis said he got involved because he felt it important to make known to elected officials “that we hold them accountable to these truths.”

San Diego police observed the demonstration from across the street — the south side of Broadway. About a half-dozen officers didn’t move to enforce any anti-crowd orders. 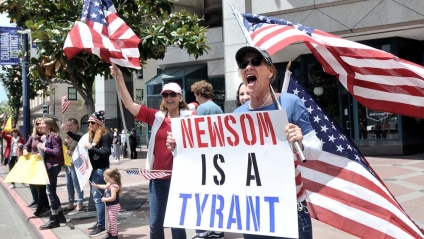 “No, I regularly preach in front of the downtown Planned Parenthood and find San Diego PD to be very sensitive to our First Amendment rights,” he said. “They are a first-class department, and I’m very glad they represent us well.”

The San Diego Union-Tribune quoted police spokesman Lt. Shawn Takeuchi as saying: “We are balancing the need to enforce and citing people for not social distancing with the anger (and) frustration that people have for being quarantined the last month.”

Did Ruis have any concern that the gathering could fuel the spread of COVID-19?

“That is always a real danger to consider,” he said. “However, many studies have put the estimated contraction rate in the 80 percentile. The majority of measures have been taken to ‘flatten the curve,’ not to stop the inevitable.”

He noted that a vaccine isn’t expected for roughly another 18 months.

“So all things considered, I don’t believe today’s events put us at greater risk weighing the economical crisis and health crisis together,” he said.

Ruis said he’s heard about plans for another anti-lockdown rally on May 1 but had no details.

(Saturday’s event was promoted on Facebook by host Naomi Israel, who posted afterward: “Thank you to everyone who came today and made it what it was. This is the revolution!!!!! The people have not seen anything yet, the next one will be BIGGER! If you’re ready, please like this post and I will create a new event. OPEN CALIFORNIA, open America and stop the … madness.”)

Ruis closed a note to Times of San Diego to say “that our rights come from God, and [hopes] government recognizes this truth. They are not the progenitors of rights. When they forget this, it’s incumbent upon the people to remind them of this.

not just themselves.  I cannot and will not be "neutral" on this issue. My daughter is a physician assistant working right now in a hospital ICU unit caring for many COVID-19 patients.  They suffer terribly before dying. Many of the doctors at her hospital who work in the emergency room are ill with COVID-19. Your "freedom" does not entitle you to hurt or kill other people, just like your free speech rights don't entitle you to shout "fire" in a crowded theater. The U.S. Supreme Court has ruled in a prior pandemic that even churches can be restricted from holding services if it risks spreading a dangerous disease.

We can wait a little longer to open up beaches and parks, folks, in order to save lives of doctors, nurses, physician assistants and others who are risking their lives to save others. Those spoiled brats partying over spring break on beaches spread COVID to countless others, some of whom are dead!  School kids should be grateful all they are being asked to do is miss classes and study at home for a little while.  My generation had people graduating and marching off to the Vietnam War,.  My grandparents lost their farm in the Depression and our grandparents fought in the world wars.  Now these brave folks are older and at high risk of dying, too, if they contract this illness which is 10 times deadlier than the flu and leaeves many survivors with permanent damage to their lungs, other organs,, and their brains.

I have some empathy for those who are out of work and for business owners worried about how to pay their bills.  We are putting together a COVID-19 local resource center with many of the options for grants, loans, rebates, and other relief that you may not know is available. For instance the state insurance commissioner just ordered insurance companies to reduce premiums and refund overpayments since risks on business insurance polices and car insurance policies are way down with everyone staying at home.  If you really need money, get a temp job  in a grocery store or food delivery service, which are hiring. Two of my friends are doing that right now, wearing masks and being responsible in addressing their money problems -- not killing people.  You can be a carrier for this deadly disease with no symptoms at all, for a week or so.

We may be neairng the peak in San Diego.  I do think small businesses will start to open soon but slowly. But it will be a long time before we have rock concerts, fairs or other large gatherings. If you open too soon, and a lot more people get sick, then new shutdowns will occur or people will just be afraid to go out, and your business wll be hurt anyway. You and your family and your workers could catch the virus and be left permanently disabled, or dead. While the risk is highest for older people, young people are dying too, even babies.  I personally know three people now who have had COVID-19 and nearly died, fighting for their lives on ventilators. They are relatively young, in their 40s or less.

Please stay home for the next couple of weeks until the restrictions begin to ease up.  Our health officials know what they are doing.  After the 1918 pandemic, cities that reopened too soon had second waves and some were worse than the first.  If you overwhelm hospitals and they run out of ventilators, many more will die. Don't  put lives of people like my daughter at greater risk.  Stop being selfish and think how you would feel if you had a family member working in a hospital caring for COVID patients right now.

Personally, I'm all for the police or sheriff arresting people protesting in violation of county health orders, especially those not wearing masks or social distancing. Fne them all the full $1,000 and quarantine the lot of them in jail, if that's what it takes to protect our brave healthcare workers, our elders and the rest of the public from these cowardly people thinking only of themselves.

Its not all about you, SHOCKER!!!! I'm all for protesting, but think about what you are doing. You are standing shoulder to shoulder with strangers that you have no idea who they are. You are protesting in this method because you want CA to open. CA WON'T open if cases continue to increase in the state. So the 100's of people today standing side by side will likely result in some people there getting sick. And considering how they are acting there, chances are they act the same way around their friends and family. So, all you have achieved is a high chance of infecting your friends and loved ones, increasing CA cases and possible deaths, thus making us that FURTHER away from being able to open the state back up. People are so dumb, selfish, and look at things from inside their own little box.