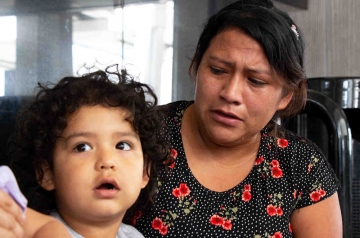 Photo via ACLU: Sammy Reyes-Mejia, 3, didn’t recognize his mother after being reunited following three and a half months of separation and being held in a federal detention center.

September 2, 2018 (San Diego) – Despite a court order to reunify all children separated from immigrant parents at the border, 497 children remain in federal custody, including 322 children whose parents were deported, the Hill reported on August 30th.   There are 22 tots under age 5 in detention, and those deported included parents of six children under age 4.

Concern for the children has sharpened amid reports that three of the detained youngsters were sexually abused by workers at an Arizona detention center, NPR reports.  This follows a disturbing ProPublica report which found that over the past five years, police responded to at least 125 reports of sexual abuse at shelters housing migrant children.

In the past, detained children were limited almost entirely to teenagers who arrived unaccompanied—youths old enough to be able to speak out and report inappropriate conduct. But the Trump administration’s zero tolerance policy on immigrant led to forced separations of even infants and toddlers from their parents, heightening concerns for the children’s safety.

The longer children remain apart, the more traumatized they may become. An ACLU report on parents whose son, Sammy, was taken from them in April and who were reunited in July indicates the 3-year-old boy didn’t recognize his mother.  She says the separation has made her feel as if “my soul was destroyed.” The Reyes-Mejia family is now back together and staying with a host family while awaiting a hearing to learn if they will be deported. The family did not enter the U.S. illegally, but instead asked for asylum at the border after fleeing violence in Honduras.

The Trump administration was under a federal court order to reunify all families by July 26th. On Friday, Judge Dana Sabraw in San Diego pressed federal lawyers for an update on reunification.  Government lawyers told the judge that they have been able to contact parents of 318 of the 322 deported parents, Times of San Diego reports.

An attorney for the American Civil Liberties Union, which filed the suit to end separation of families and reunify those separated, said they have independently confirmed the wishes of parents of 43 children and will report back to the court soon.

Many are expected to request reunification in their home countries, mainly in central America. But some may have been coerced or misled into abandoning asylum claims, said ACLU attorney Lee Gelernt.

While some immigrants crossed the border illegally, others did not. Many fled violence or persecution in their countries of origin and presented themselves lawfully at the border to request asylum, but were illegally separated from their children and detained anyway. Those parents could have legitimate claims to be granted asylum in the U.S.

Judge Sabraw has previously told the Trump administration that it is “100 percent responsible” for the separations and for reunited the separated families.

The Trump administration ended separation of families after national protests over the policy.  Other options, such as ankle bracelet monitoring, is now being used for undocumented immigrants awaiting hearings to enables families to remain together.