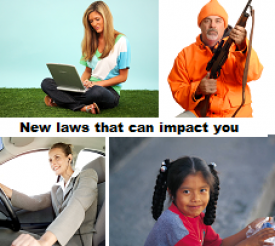 January 1, 2013 (San Diego’s East County) – Starting today, your boss can’t ask for your Facebook password or username, thanks to AB 1944. Neither can universities, due to SB 1349.

Duke Cunningham won’t be able to run for office again under AB 2410, which bans those convicted of a felony involving bribes, embezzlement of public funds, perjury or offense of the public trust from becoming a candidate for any elective office in California.

These are just some of the new laws that take effect January 1, 2013.  Scroll down to read more--and how these legislative changes may impact you, your family, your workplace or your school.

Picketing at funerals becomes a misdemeanor  under SB 661, passed in reaction to the Westboro Baptist Church members who have picketed funerals of soldiers and school shooting victims.

It’s now illegal to carry unloaded rifles on city streets, unless you’re hunting, target shooting, participating in a parade, gun show or certain other activities, due to AB 1527.

Illegal hunting of bighorn sheep,  elk, deer and antelope will be costly; fines quadruple to $40,000 under AB 1162.

You can’t be arrested if you call for medical help to assist someone who suffered a drug or alcohol overdose under AB 472, California’s new good Samaritan law.

How your school’s Academic Performance Index is calculated has been revised by SB 1458, which puts less emphasis on standardized testing and requires that other factors also be used including graduation rates and  the percentage of students advancing to college.

Cockfighting fines double to $10,000 under SB 1145, which also cracks down on other forms of animal fighting.

AB 2570 prohibits gag orders in settlements of lawsuits against professionals such as doctors and contractors, so plaintiffs can now speak with state regulators conducting investigations.

Discrimination based on religious dress or grooming, such as Sikhs’ turbans, is now banned under AB 1964.

You can’t hunt bears or bobcats using dogs under SB 1221; exceptions are made for dogs guarding livestock and certain other cases.

Your health insurance must cover mammograms, according to AB 137.

Drivers can send or listen to text messages with a hands-free device under AB 1536.

Lenders cannot start foreclosure proceedings on your home while telling you they’re considering loan modifications under SB 900 and AB 278, which expand homeowner rights.

Your landlord can’t force you to pay your rent online, according to SB 1055.

Children of undocumented immigrants can qualify for driver’s licenses if they came here as youths and have led productive lives under AB 2189, which is in line with the federal Deferred Action program.

If you drive certain hybrid and other clean-fuel vehicles, you won’t have to pay a toll to use HOT carpool lanes, per AB 2405.

AB 1616 legalizes and creates standards to sell certain foods made in home kitchens, such as breads, tortillas and jams.

Public employees’ pension system will have benefits capped and benefit formulas reduced for those hired today or later, and requires employees to start paying half their pension costs within five years, under AB 340.

Charter cities that prohibit project labor agreements will not be able to get state funds for construction projects, according to SB 829.

Youths convicted of crimes while juveniles can, after serving 15 years, ask a judge for the possibility of parole after 25 years in prison, under SB 9.

A controversial conversion therapy that aims to turn gay teens straight is banned by SB 1172.

Self-driving vehicles can be driven on streets in California as long as a licensed driver is in the vehicle.