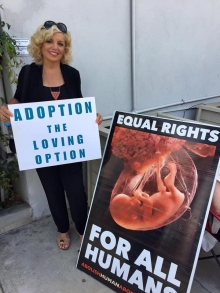 August 22, 2015 (San Diego)—Hundreds of people demonstrated outside multiple Planned Parenthood locations in San Diego as part of a nationwide  protest in over 310 cities.  Mary Moran, a local organizer, says the protests are over Planned Parenthood “harvesting and selling aborted baby parts—some organs were harvested while the baby’s heart was still beating.” 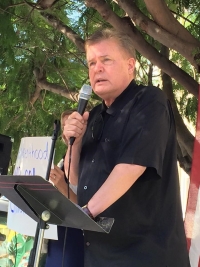 Planned Parenthood has denied selling any fetal parts, which would be illegal. The organization has provided fetal tissue to StemExpress for stem cell research, but denies that any laws were broken.

Speakers slated included State Senator Joel Anderson, who says of Planned Parenthood, “Our government should no longer be their partner.”

Pastor Jim Garlow of Skyline Wesleyan Church called the situation “a modern holocaust of unborn babies, as their limbs and organs are being harvested and sold by Planned Parent—with the full knowledge and monetary support of our government,” according to an email sent by organizers of the rally.

The protesters seek federal defunding of Planned Parenthood after the Center for Medical Progress, a California-based pro-life group, published excerpts of undercover videos that showed Planned Parenthood staff discussing the harvesting of tissue from aborted fetuses.

The seventh and most disturbing video showed Dr. Deborah Nucatola, Planned Parenthood’s senior director of medical services, talking about how to provide intact organs for researchers. “If we alter our process and we are able to obtain intact fetal cadavers then we can make it part of the budget,” she said on the video.

The video also featured Holly O’Donnell, an ex-procurement technician for StemExpress, who said she saw evidence that Planned Parenthood aborted intact fetuses, including one case where she tapped the body of a fetus after the brain had been extracted, and claims the heart started beating.  StemExpress severed its ties to Planned Parenthood last week, after earlier videos surfaced.

RH Reality check reports that at least one aspect of that video was falsified. The video shows what appears to be an aborted fetus while the audio describes the purported brain removal, but in fact the image was of a fetus from a miscarriage. Photographer Alexis Fretz of Pennsylvania has said she published the image on her website with a description of her experience undergoing a premature delivery.

In late term abortions, which are done only rarely, an injection is customarily given to stop the heart of the unborn fetus before the procedure is done, in order to make the termination of pregnancy more humane.

It is unclear whether the case on the video was a voluntary or involuntary heartbeat, to use the medical terms. If voluntary, meaning beating on its own without outside stimuli, it would be a violation of federal law to not take efforts to save a baby born alive.  The Born-Alive Infants Protection Act signed into law by President George W. Bush in 2002 extended legal protection to an infant born alive after a failed abortion attempt.  A heartbeat is among the criteria listed in the bill for determining life. 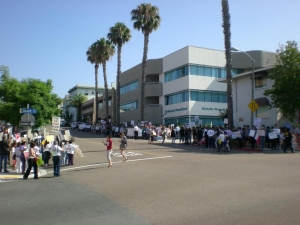 Some counter-protesters also turned out in support of Planned Parenthood, which provides birth control, PAP smears and other women’s medical needs in addition to abortion services.

Planned Parenthood of the Pacific Southwest issued a written response which states, “These false claims are being used to advance a political agenda to ban abortion and to defend Planned Parenthood,” the San Diego Union-Tribune reports.