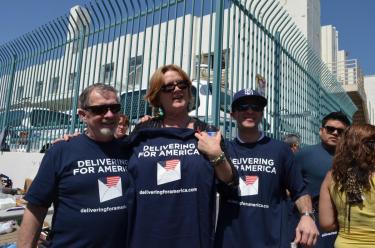 According to Jim Wazenbach, treasurer of the California State Association of Letter Carriers, “clusters boxes are now the norm” at new projects and may ultimately be required in existing communities. There is a concern that older or disabled people will not be able to get to them.

Closure of many rural Post Offices is also proposed. While the current list does not include any in East County, Elias indicated that some could be added in the future as the push to slash spending continues.  Rural residents in areas such as Potrero, Lakeside, Boulevard,  and Campo could potentially have to drive to the closest station to pick mail. Beyond inconvenience, closure of rural stations could make it hazardous or impossible to pick up mail in snowy or icy conditions at stations many miles away.

Moreover due to delays at the processing plants, this could also mean that mail might take longer to reach its destination, and it opens the road to privatization.

The Post Office is not going broke.  The current “crisis” has been manufactured, starting with the 2006 Postal Accountability and Enhancement Act of 2006. This Act put a burden on the Postal Service that other agencies and businesses don’t have to follow. In effect, the Act forced the Postal Service to fund health and retirement benefits for workers 75 years into the future.

In 2006 the United States Postal Service “was making a lot of money, but the Act forces the USPS to put aside $5.5 billion a year. This fund currently has $46 billion dollars in it,” Elias said. He added that before being forced to set aside these large sums for health and retirement, the USPS between 2007-10 was $600 million in the black each year. In fact, the USPS  did not even lose money during the worst of the economic crisis. This first quarter of 2013 alone, the USPS is $100 million in the black.

This is in-spite of the internet and e-mail, which have reduced some mail volume. Nor is any of this money to operate the USPS taxpayer funded. All this comes from the customers of the USPS paying for stamps and other Postal services.

Right now there are bills in the House and Senate that aim to fix the situation and  make sure that the crisis is over by eliminating pre-pay requirements for benefits that are not imposed on other agencies. This would save postal delivery service and jobs.

But Representative Darrell Issa (R-San Diego) has played a key role in blocking the reforms as Chair of the Oversight and Government Reform Committee, says Elias, who adds that Issa has refused to allow the measures to come up for a vote.

Ali Ahmad, Communications Advisor for the Oversight and Government Reform Committee responded to an ECM inquiry. "There have been no major Postal bill that has been introduced this Congress,” he stated.

But in fact, Peter DeFazio (D-Oregon) introduced  HR 630, the Postal Services Protection Act of 2013 on February 13 and Senator Bernie Sanders, an Independent from Vermont, introduced a companion bill, S316, in the Senate this session.

Ahmad acknowledged that “Last Congress, Chairman Issa introduced a Bill that allowed for a cut in Saturday Delivery.” He noted that an Appropriations Bill that was passed on Thursday by the Republican majority in the House  continues a 30-year requirement for mail delivery six days a week, including Saturdays.  But Ahmad said, “In the view of the Chairman this does not mean that the USPS cannot modify Saturday delivery."

In a February 6, 2013 press release both Issa and Senator Tom Coburn (R-OK) stated: “ House Oversight and Government Reform Committee Chairman Darrell Issa, R-Calif., and Senate Homeland Security and Governmental Affairs Ranking Member Tom Coburn M.D., R-Okla., sent a letter to leaders of both chambers of Congress supporting today’s announcement by the United States Postal Service that in August it would shift from its current delivery schedule to a six-day package, five-day mail delivery schedule. Issa and Coburn are the top Republicans on the respective House and Senate Committees with jurisdiction over USPS.”

What worries Chairman Issa the most is that since the health care liability has been done on a pay-as-you-go basis, there will not be money to fund future obligations and that the taxpayer will have to pick up the slack. The taxpayer already paid once, when they bought services, he contends. What he wants is for the Postal Service to prefund health care obligations the same way as the Pension Fund has been covered.

Yet, according to Elias, two independent audits, one by the Inspector General Office, the second by the Postal Regulatory Commission, has found that the fund to prepay for retirement is overpaid from $50 million to $75 million. This money is not the taxpayer money, but the workers. That money will also go a long way in alleviating the solvency crisis.

Postmaster General Donahoe has cited a study that claims a $2 billion savings if Saturday delivery was stopped. But the same study also shows that the USPS would lose $5 billion in income. Elias says the math doesn’t add up.

In the end, according to Elias, “Our seniors, small businesses and rural customers will feel the greatest brunt.”

Fears of jobs losses and impacts on East County

Jim Walzenbach, told ECM that the expected effect on job losses are at 85,000 people who will ultimately lose their jobs.  He also agreed with Elias that the effects in our small back country communities, such as Campo, Jamul, even Brawley in the Imperial County, will be deeply felt.

Tim Tellez, a mail carrier from Santee told ECM that the Santee system will close if this goes though. He added, “People will have to go to La Mesa or El Cajon to pick up their mail. The same goes for Alpine and Lakeside residents.”

There is palpable fear by postal workers of losing their ability to serve their customers, as well as station closures. At this time none in the San Diego East County have closed, but the La Jolla Station, as well as one in North Park have shut down. Moreover, the Midway Mail Processing Center has been closed, with only the Mary Sellers Plant in Poway remaining open to process mail. The Midway building remains as a Post Service Station. 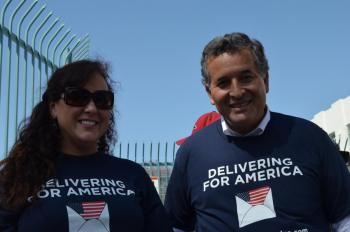 ECM spoke with Congressman Juan Vargas (CA-51-D) who represents the southeast portion of the county, including many communities that will be impacted.  He said that “Chairman Issa (Committee on Oversight and Government Reform) has to understand that Saturday delivery is an absolute necessity that people and businesses rely on.”  He added, “”We’re hoping he changes his mind.”

Congressman Vargas added, “It’s a fight. Right now there are three parties in Congress, Democrat, Republican and the Tea Party…. It is truly a conflict between the Progressive Caucus and the Tea Partly Caucus. The Tea Party is crazy,” he said of what he views as extremist cuts pushed forward by Tea Party-backed members.

Afterwards he addressed the hundreds-strong crowd, telling a story of how Abraham Lincoln’s Postmaster General, Montgomery Blair, established Saturday and Sunday delivery to the troops in the front lines. “This was vital to the moral of the Grand Army of the Republic. This helped to keep moral and to these days “service members count on the mail to keep in contact with family and friends.”

Congressman Vargas also joined the workers who walked around the building many times, holding a sign with them, and talking to them.

Congressman Scott Peters (D-San Diego) came next and told the crowd that “a lot of people are on your side.”

Lorena Gonzalez, Secretary-Treasurer of the San Diego-Imperial Counties Labor Council,  also talked to ECM about the effect of stopping Saturday delivery. She said this would result in loss of hundreds of thousands of jobs across the United States, many of them held by veterans.

Gonzalez thanked letter carriers for delivering mail. “We know the one person who stops every day at our homes. That is the letter carrier. They keep an eye on our communities and keep us safe.”

She then asked how many of those present were veterans. Many raised their hands. “The USPS is the biggest hiring hall for veterans,’ Gonzalez noted. “Our men and women are coming home from the Middle East and Afghanistan. They are having a hard time finding jobs. This is not the time to cut those jobs.”

Gonzalez emphasized that it was necessary to maintain the best postal service in the world.

Marty Emerald (San Diego City Council District 9) also came to give support. Her fear is that if  “we start shutting down the Post Office with already limited resources, it will seal the fate of the Postal Service. People will go to the Internet.” 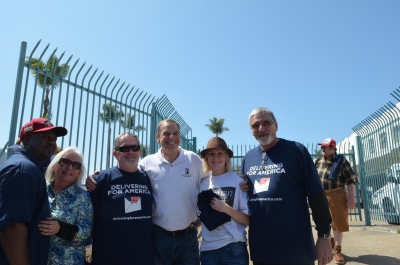 The final politician to show up was Mayor Bob Filner of San Diego. For Filner, a Congressman up to last year, this is about universal service and universal access.

First he thanked the workers for doing their job and delivering for America. He also told them that “the day of vilifying local, state and federal employees is over in San Diego.”  He told them that the cut would amount to a 17% pay cut and that “this was not right.”

Letting go off this will only hurt the country, It will take away from what makes the Country great, Filner believes. He urged members of the Postal Service to take the fight to the offices and homes of members of Congress.  “Go take it to Issa’s district,” he said, adding, “The last thing politicians like is to be embarrassed.”

Mayor Filner told ECM that this “cuts people off from daily contact, that people are used to. People who are already isolated will be more isolated still.”

San Diego County’s two Republican Congressman – Duncan Hunter, who represents East County, and Darrell Issa – did not show up, nor send a representative.

Mary Rogers, a resident and letter carrier in La Mesa, told ECM  that “We work to increase our market share.” She added that lack of Saturday delivery will kill that and give an opening for the competition.

She pointed out  a fact of which some people are unaware  The USPS needs to be run like a business,  it’s been said. But Postal rates and services offered require authorization by Congress, even though the Postal Service funds its operations through the sale of stamps, not with taxpayer funds.

"We’re on our route every day except Sundays… We have called in when a senior is not well, we help at accidents, many mailmen are first aid and CPR trained. we have called in gas leaks.” She concluded, “We help to keep people safe.”