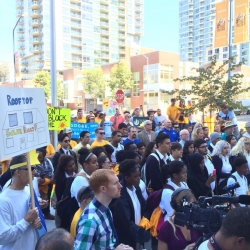 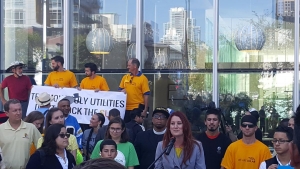 “For the first time, SDG&E has some competition, and they don’t like it,” said Pete Hasapopoulos, organizer for the Sierra Club’s My Generation campaign. “With these new fees, SDG&E is trying to block solar power just as it is becoming available to a wider range of businesses and families in San Diego. We stand here united to protect energy choice and solar power in San Diego.”

SDG&E’s proposal includes a number of changes that would “destroy electricity bill savings for new rooftop solar customers, including significant new fees and charges on solar customers, and slash the price that solar users receive for the excess power they generate and provide to the grid. The effect of these changes would be to cripple rooftop solar power, block competition and effectively eliminate customer choice,” a press release from the Sierra Club states.

The thrust of SDG&E’s proposal is to end net energy metering, a critical state policy that makes rooftop solar possible for most users. Net metering allows ratepayers with solar panels to receive fair compensation for the excess electricity from their rooftop solar panels that is sent back into the grid. Net metering has been the foundation of California’s growing rooftop solar industry, as it enables lower-cost financing models, like solar leasing, that put solar within reach of middle class and lower-income homes across the state. In recent years, growth of rooftop solar has boosted California’s supply of clean energy, reduced greenhouse gas emissions, and helped create more than 54,000 solar jobs across the state, all while giving customers choice and challenging monopolies like SDG&E for the first time.

SDG&E’s proposal is being considered by the CPUC, which will decide whether to accept or reject SDG&E’s anti-solar proposal by the end of the year.

California’s two other major utilities, PG&E and Southern California Edison, have submitted similar proposals, which would remove energy choice for customers and threaten California’s progress on solar power. Rallies against those proposals are planned for later this month.