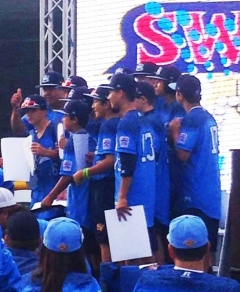 September 3, 2015 (Bonita) – The Sweetwater Valley boys may have lost a heartbreaker, but to their families and friends, they’re winners. 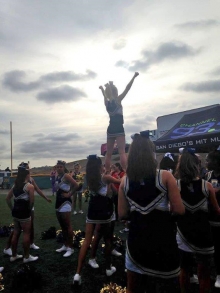 Hundreds of families, friends and supporters came to the Sweetwater Valley Little League Complex on Tuesday night to congratulate the boys in blue.  The ceremony was complete with Chula Vista mayor Mary Salas, San Diego County Supervisor Greg Cox, Joe Little of Channel 10 news, and of course, the boys themselves, who were flattered at the support.

“I couldn’t do this without my team.  It was a team effort,” pitcher Dante Schmid said. “thanks to the coaches and fans for supporting us.”

Probably the proudest of the boys, however, were the coaches.

“Couldn’t be prouder,” coach Arturo Maldonado stated simply. “We always put ourselves to the test every game to go out there and perform at the highest level possible.”

Seeing the joy on their friends and family’s faces made the boys realize that they had made San Diego proud.

“Chula Vista is truly a city of champions,” mayor Mary Salas said in her speech.

Behind the smiling faces, however, the boys and the coaches were still feeling the after effects of that heartbreaking loss to Texas.

“The boys were sad.  You could tell in their faces,” Maldonado said somberly. “But you know what?  The greatest thing about coaching youth sports is within a couple of hours, you feed them some pizza, you give them some soda pop, and they’re back to being 12-year-old boys, 13-year-old boys having the time of their lives in what very few people get to experience, being at the Little League World Series.”

Even though they’re home and about to go back to school, the boys aren’t done achieving their dreams yet.  All of them are ready to take another shot at a Little League World Series championship, and some are dreaming even bigger than that.