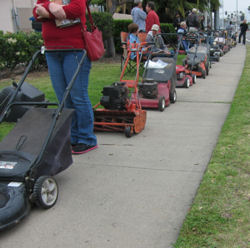 Residents exchange old, gas guzzling lawn mowers for zero-emission models at County
May 20, 2012 (San Diego)--County residents began lining up early this morning at the County Administration Center for the chance to trade-in their old, gas powered lawn mowers for new, zero-emission models. The price? The Black & Decker mowers, which normally retail for $400 plus tax, cost just $99.99 at the 13th Annual “Mowing Down Pollution” Lawn Mower Trade-In Event.
In all, the County distributed more than 480 of the 36-volt cordless mowers on a first-come, first-serve basis. Since the event began in 1990, the county has exchanged more than 6,000 rechargeable mowers for their gasoline-burning counterparts.
The trade-ins have made a real dent in air pollution, removing more than 22 tons of pollutants each year. Gas-powered machines emit an average of about 10 pounds of air pollution per year, said Robert Kard of the San Diego County Air Pollution Control District. The new, upgraded models emit zero pollution. Local air pollution fines and penalties lower the cost of the mowers.
Residents had to show photo IDs and prove county residency to exchange their mowers. One trade-in was allowed per household and old models had to be in working condition with all parts attached.
Residents were asked to empty old mowers of oil and gas.
The event started at 8 a.m. in the North Parking Lot of the County Administration Center at 1600 Pacific Highway but many residents lined up earlier than that.
For more information, visit ronroberts.com or the County Air Pollution Control District’s website at sdapcd.org.