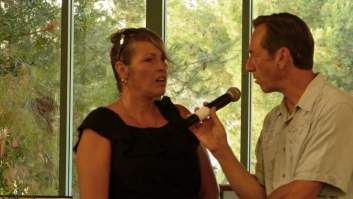 August 19, 2018 (Alpine) – “Your life can change at the drop of dime,” Lisa Ford told a standing-room only crowd of more than 400 people packed the Alpine Community Center last night for a fundraiser to help survivors of the West Fire.

She was one of 34 people who lost her home in the July wildfire. Ford was away when the fire began and learned of it when her daughter texted her a cell phone image of her mobile home in flames.  “I just buckled at the knees,” she recalled, adding that the impact is still “devastating.”  Despite those losses, she reflects, I’m very happy and blessed that the community is coming together… It’s really helped me spiritually to realize that there are wonderful people out there, at least in Alpine.”

Another family with five children had prepared for evacuation, with important belongings carefully se

t aside to take with them in case of fire.  But they were away from home and lost everything.

Styles served as auctioneer, encouraging the crowd to bid up on items ranging from flags flown over the U.S. capitol to a vacation at the new Willows resort at Viejas in Alpine.  Barona and Sycuan also donated major prizes.

Photo, right: Viejas representatives filled a table at the event. 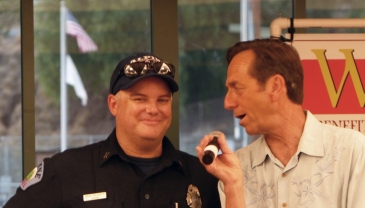 hen a woman bid $1,100 for dinner cooked up by Alpine firefighters at the “hottest place in town” – the fire station, Styles coaxed a fire official into offering up a second dinner for another bidder who promptly pledged $1,200.

Viejas filled a table at the event, as did other local groups including the Grossmont Healthcare District in La Mesa.

Elected officials included Assemblyman Randy Voepel and members of the Grossmont Healthcare District Board of Directors. Former Congressman Duncan Hunter Sr., who lost his own home in the 2003 Cedar Fire, was also present.

Photo, right: Grossmont Healthcare District's board of directors came to support the cause.

Descanso Junction served up dinner and also donated 45 extra pounds of roasted tri-tip for the auction, with 15 pounds of it purchased by a bidder who donated it to the firefighters.  Miss Alpine and her court sold raffle tickets for the cause.

Roger Garay, director and treasurer of the Alpine Community Foundation, a 501c3 nonprofit, said despite losses suffered by the community, “We’re grateful to the firefighters and sheriffs, our first responders,” drawing applause.

Garay (left) explained that how to spend the funds will be determined by the Community Recovery Team, which was started after the 2003 firestorms to help identify and fill gaps between insurance government, help from government agencies and full recovery for communities.  The group will allocate f 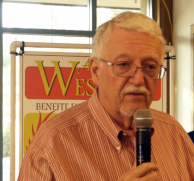 unds based on who has the greatest needs. 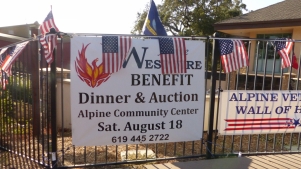 Donations poured in, large and small.  Baron’s Market presented a $5,000 check to help the fire survivors.  Coldwell Banker and Modern Woodsmen each gave checks for $2,500.  A hairdresser donated over $2,000—half of her July earnings.

A little girl who won a jar filled with $25 worth of coins (left) at another event donated it to help the West Fire survivors.

The total revenues from the event may take several weeks to tally, says Lori Bledsoe, Alpine Sun Editor who he 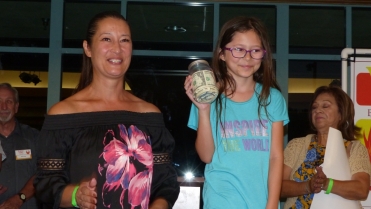 lped organize the successful event in just three weeks. But the number was clearly in the tens of thousands, based on 400 ticket sales, the large donation checks and live auction prizes sold.

Like a Phoenix rising from the ashes, Alpine will rebuild, thanks to the generosity of its residents and people from across East County who came to help those in need.