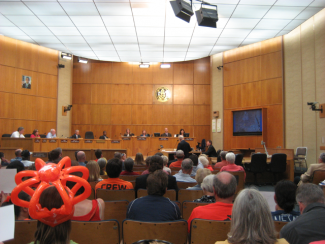 The Quail Brush Generation Project would be sited on 10 acres of privately-owned land in the city of San Diego that abuts Mission Trails Regional Park, north of State Highway 52 and right outside of Santee’s city border.

The builder, Cogentrix, has signed a power purchase agreement with SDG&E to build, own and operate the plant and provide power to SDG&E.

The purpose of today’s meeting was to affirm a planning commission staff recommendation to allow consideration of the proposal: a zoning amendment to the East Elliot Community Plan. If approved, construction of the plant would begin in early 2013, with completion slated for 2014.

Planners voted 3 to 2 to deny initiation of the amendment; however 4 votes are needed for a decision and two commissioners were absent.  So the matter will be taken up again on July 19.

The power plant's primary purpose would be as a “peaking facility.”  According to proponents, it would provide electricity when needed quickly. The plant would provide support to the existing transmission grid and maintain overall reliability of the system to deliver electricity to customers without interruption of service. With new wind power and desert solar facilities slated to come online in the near future, the plant has also been touted as a backup power source for when the wind doesn’t blow or the sun doesn’t shine. Operation of the plant would be limited to 3,800 hours, or 43% of total hours in a year.

It was standing room only in the 400-seat hearing room, with the crowd spilling out into the hallway. Over 200 people signed up to speak, with some ceding their time to others.

Despite admonishments from planning commission chairman Eric Naslund for speakers to keep comments brief and not repeat points made by others, speaker after speaker representing local homeowners and environmental groups expressed widespread vocal opposition to the plant.

Speakers opposed to the project expressed concerns that the electric plant would produce exhaust and particulate containing dangerous concentrations of lead and carcinogens and carbon dioxide which may contribute to global greenhouses gas, and could negatively effect local property values, and confound local homeowners from purchasing reasonably priced fire insurance.

Others stated that the plant was not needed and did not fulfill a true public need and necessity. Several speakers brought up how opposition to the plant has united city and county politicians on both sides of the political aisle, including Congressman Bob Filner, County Supervisor Dianne Jacob, and 77th District Assemblyman Brian Jones.

Local community activist and “intevenor” Rudy Reyes, an archeologist and 2007 Cedar Fire burn victim, cited concerns that the plant construction could end up desecrating local Indian burial grounds, disrupt the ecology of Mission Trails Park, and spoil the wide vistas afforded by the park.  He also said the plant could be a fire danger.

“Look at the cultural history on that site. Native American bodies were used to build the dam on that site. They have found things of significance which have been hush-hushed,” he said.

Lori Ziebart, Quail Brush’s project consultant and coordinator, said the site for the plant was selected because of its proximity to existing electric transmission corridors and an existing natural gas pipeline, and the ability to deliver economic electric generation to the utility system where it is needed.

She challenged community claims that the plant’s two-thirds of a mile proximity to West Hills High School posed an environmental threat to students, citing the operation of similar larger plants in Escondido and within t he urban areas of Los Angeles County.

Regardless of what decision planners reach on July 19, the issue may be appealed to the City Council.  In addition, the California Energy Commission has the power to override both local boards under certain circumstances.  That power is rarely invoked, thought the CEC did so to push through approval of the Carlsbad Energy Center Project locally.

Naslund advised project opponents to “concentrate your energy on the California Energy Commission, regardless of what happens here. That’s your next line of attack.”

Ten-year-old Barbara had the courage and poise to stand up in a "David versus Goliath" moment, to tell the San Diego Planning Commissioners what she thought about the idea of a power plant adjoining national bio-gem, Mission Trails Regional Park.

It was never okay with me. Those horrible towers now march from our city to the desert and they are terribly ugly (not to mention fire hazards). But according to SDG&E, that was supposed to take care of all our power needs. These peaker plants are just a way for them to make more money for themselves. Don't be hating on fellow rate-payers. Stand up to the Power Giant like the rest of us. We don't leave our porch lights on at night, either.

The Project before the planning commission does not meet the criteria necessary to be put forward. The need for the plant (IE power demand) and the public good was not demonstrated enough to justify the 600 million the rate payers (All of San Diego) will eventually have to pay for. The plant is not needed anywhere, we don't have to believe everything that SDG&E says, I think there is plenty of evidence in the public record to show they are just trying to line their pockets.