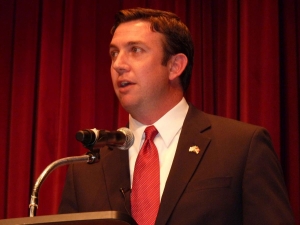 January 31, 2011 (San Diego’s East County) – Sylvia Hampton, past president o f the San Diego County League of Women Voters, sent a letter she received from Congressman Duncan Hunter (R-Alpine) to www.Factcheck.org, a nonpartisan project of the Annenberg Foundation at the University of Pennsylvania that researches accuracy of statements by public officials.
“Congressman Hunter’s description of the bill is not entirely accurate,” concluded Eugene Kiely, director of FactCheck.org in Philadelphia. Further, he found Rep. Hunter’s use of some statistics “misleading.”
Below is the full response from Factcheck.org, which Hampton forwarded to East County Magazine:

Congressman Hunter’s description of the bill is not entirely accurate.

Hunter is correct that it contains an individual mandate -- that is, a requirement that individuals have health insurance, although there are "hardship" exceptions. But there is no similar mandate on small businesses, and in fact some small businesses will be eligible for tax credits. The IRS explains the tax credits here. Larger businesses -- many of them -- will have to pay penalties if they don't provide coverage for their employees. For those of you want more information on the impact of the law on businesses, we have written about that topic just recently here.

The congressman's use of CBO (Congressional Budget Office) figures is misleading. As we wrote before, "The CBO said that 8 million to 9 million people who would be expected to have employer-sponsored insurance under current law wouldn’t be offered such benefits by 2019. These would mainly be low-income workers, CBO said, who would be eligible for subsidies to buy their own plans. Others would gain coverage through their jobs under the bill, resulting in a net decrease of 4 million people on employer-sponsored insurance." You can read more about that here.

As for the cost, we recently posted this article that refutes misleading claims made by both Democrats and Republicans.

Thank you for reading FactCheck.org,

Search on the web "Wise Health Insurance" if you have a condition such as high blood pressure, asthma, diabetes, cancer, depression or have had an injury, like a broken leg and need health Insurance NOW.