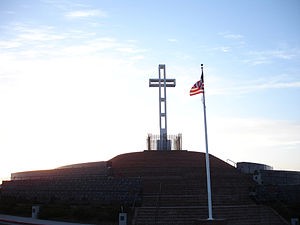 A federal appellate court ruled that the towering cross on federal land favored one religion over others, violating the Constitution.  The U.S. Supreme Court refused to hear the case and a district judge in San Diego ordered that the cross be removed, leaving transfer to private ownership as the only means to save the 43-foot-tall cross.

Under the bill’s provisions, the Mount Soledad Memorial Association will purchase the property for its appraised value and keep it in perpetuity as a war memorial. The Association has stated that is raising funds to pay for the purchase, City News Service reports.

I'd like to see this settled, too, though it's hard to imagine these "critics" being satisfied with anything less than the destruction of the Cross. Remember, the land had already been transferred; it was only a technical objection to the way in which it was carried out that's kept this (phony) issue alive. And isn't it, in the grand scheme of things, absurdly ironic? After all our Capital--national, state, and local documents, etc.--are filled with references to God and religion. That a case like this could elicit anything but derisive laughter from a judge defies all explanation.
I hope this is the end of this decades-long fiasco. I've always viewed the cross as a landmark rather that a religious symbol. I worked nearby and would drive up the hill to enjoy the view and eat lunch.