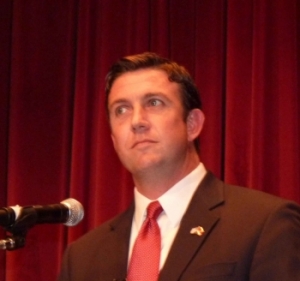 February 11, 2017 (El Cajon) – As we reported Friday morning, a group of constituents presented Rep. Duncan Hunter’s office in El Cajon with a petition signed by 500 voters asking the Congressman to hold a public town hall meeting where they could share concerns on various issues.  Hunter aide Joe Kasper told the Los Angeles Times that Hunter has held town hall meetings in the past, including telephone town halls.

East County Magazine asked Kasper to clarify when and where such town halls were held, noting that we did not recall hearing of any live town halls hosted by the Congressman that were open to the public, though he has spoken at Chamber of Commerce and Tea party events.  Specifically, we asked Kasper to document the dates, times, locations and organizations hosts of all town hall meetings since Hunter took office.  We asked if any town halls were open to the general public, and asked for notification of any future town halls.

Kasper responded Friday afternoon with an e-mail in which he said Hunter has held town halls but did not provide details of any town hall meeting that Hunter’s office organized which was open to the public, only appearances by Hunter at job fairs he hosted or events organized by other groups.

Kasper indicated that while Hunter he “not against doing a town hall if the schedule allows” his schedule is busy. He added that Hunter would “listen and be respectful but he won’t take crap from anyone,” an apparent reference to the vociferous nature of some town halls held recently by Congressional members in other districts around the country.

Below is Kasper’s reply in full:

“He’s had them – I guess it’s just a matter of paying attention to the announcements.  I recall on most occasions, groups or entities have hosted them, and it’s a matter of Hunter showing up.  He’s also done them connected to job fairs he’s hosted.

And in the case of the current requests, he’s considering doing one in short order.  But it all depends on what the schedule will allow.  But if the schedule will accommodate it, it will be open to the public and not any one particular group.

Also, contact in the office has been routine. Almost every week, we receive on average 1700-2000 emails.  Last two weeks we’ve been at the higher end but it’s within the standard window of contact.  Same for phone calls.  There are also a lot of repeat callers.  We make sure that Hunter is always aware of the contact and feedback—and he said he’s not against doing a town hall if the schedule allows.  But we are in session in DC almost 5-days a week through April.  Next week is the only open week but he’s committed to engagements already—some several months out, that he’s unwilling to break.  So, as I said, if the schedule allows for it, he’ll consider doing one and one thing you know about Hunter—he’ll listen and be respectful but he won’t take crap from anyone.”

Been part of his town halls. They are on the phone. Just sign up for them. You can talk to him etc. The thing he does not want is the terrorist wing of the DNC to come in and start throwing bricks through windows, burning buildings, and assaulting women and children like we have all seen recently.
The liberals have lost their minds and don't seem to understand we live in a Republic that supports the election of citizens. Real Americans will not allow these domestic terrorists of the DNC to threaten our lives and the lives of our families.

from readers that the phone town halls screen out any questions from people who disagree with him. That's not a townhall format, that's a fan club.

While it's okay to screen out outright crazies (as is regularly done at debates) screening out dissenting views amounts to turning a townhall into a forum for propaganda instead of listening to constituents' concerns and allowing constituents to hear their elected officials' views, even if they disagree. I don't see Democrats screening out Republicans. Do you think they should do this too?

As the other commentator mentioned, I too am "alarmed at the chaos the new administration has caused and we are disturbed that our only direct liaison to our government, Duncan Hunter," is unavailable. I can only assume his avoidance is because he is under investigation himself and know has become derelict in his duties in serving his constituents. Additionally, of deep concern is the "increased ICE raids" that have been reported and Congressman Hunter's has gone on record to state that he would deport U.S. born citizens if born from illegal immigrants. This is a violation of the 14th amendment and laws that govern this great country. I would like to give him a chance to recant his unlawful statements. First born Americans include the likes of Colin Powell,Walt Disney and so many many others.
I am the lead for Together We Will Duncan Hunter CA-50 Focus Group. We have over 350 constituent members and growing daily. I circulated a petition calling for an in-person town hall meeting with Duncan Hunter. It has been signed 672 to date. My group rallies every Tuesday at 10am in front of both offices in El Cajon and Temecula. 58 constituents attended the Temecula rally this week as well as another 50 in El Cajon. Those numbers are also growing. We are a group of mostly women, some of us are retired, some of us are neighbors, a lot of us are parents. We come from all political parties. What brings us together? We are alarmed at the chaos the new administration has caused and we are disturbed that our only direct liaison to our government, Duncan Hunter, is completely dismissive of us. The remarks Joe Kasper made in the LA Times article only stoked the flames further. We understand that Duncan Hunter is under investigation and therefore wishes to stay "under the radar" of public scrutiny but you can only hide for so long. The longer he avoids hearing our concerns, the more frustrated we become and we aren't going anywhere. We are in this fight for the long haul.
I can hardly believe the feedback from constituents "has been routine." As the organizer of Indivisible North San Diego County, we have organized 3 rallies at Duncan Hunters' office, a call-in campaign last week, and were the ones that have put his feet to the fire to provide an in-person town hall meeting by presenting the petition. If we don't get answers - and a commitment - on Tuesday, Feb. 14, contact us for information on our next action. We have listened to Mike Harrison and been respectful and don't appreciate hearing Hunter aide, Joe Kasper, state that he won't "take crap from anyone." When did Hunter's constituents get reduced to crap? Is an opposing position not valued? Mr. Kasper's comment is not a professional comment conducive to communicating with Hunter's constituency.
I smell chicken burning.

Daddy's boy talk! Go pet your rabbit but not too hard!