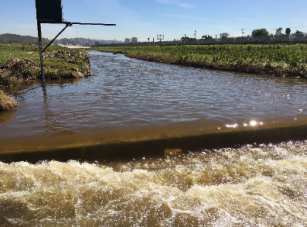 May 31, 2017 (San Diego) — Congressman Duncan Hunter (R-Alpine)  sent a letter May 9th to Secretary of State Rex Tillerson and to Scott Pruitt, administrator of the Environmental Protection Agency, asking them to take action in the wake of a major sewage spill into the Tijuana River Valley in the U.S. from Mexico earlier this year.   Hunter cites concerns not only for environmental and public health, but also negative impacts felt by U.S. Border Patrol agents and Navy Seal teams performing responsibilities in the area daily.

Hunter says the spill “has increased their risk for exposure to a multitude of diseases and pollutants…I have personally received reports of Border Patrol agents falling ill, being forced to leave their shifts and seek medical attention, possibly even putting their families at risk when these agents return home…Additionally I am aware of critical military operations and exercises in the area being suspended because of the harmful conditions and risk the current spill poses. In other words, this sewage spill is unquestionably adversely affecting our ability to respond to national security priorities”

The Congressman says that despite meetings with local officials and actions by the U.S. international Boundary Water Commission, “I believe a review alone is woefully insufficient” while Mexico’s response has been “passive at best.”

He seeks greater accountability and benchmarks that he believes Mexico is “fully capable of meeting.”

He asked Tillerson and Pruitt to have their offices get directly involved to assure that every federal resource beyond the IBWC is dedicated toward resolving the situation and assure that Mexico is motivated to equally dedicate itself toward addressing “this critical situation on their side of the border.”

On March 1st, Congressmen Juan Vargas and  Congressman Scott Peters  sent a letter to  Pruitt and toTillerson urging the EPA and State Department to take action. In April, Vargas toured the spill site. Vargas has also criticized the Trump administration.

There have been repeated spills, including 13 separate discharges in January-February 2016 that spilled 27.6 million gallons. In 2017, a spill that began Feb. 6 pumped an estimated 143 million gallons or more of raw sewage into the Tijuana River over 17 days, causing widespread contamination on the U.S. side of the border.  The spill resulted in foul odors, e-coli contamination in the Tijuana River Valley and other damage.  An investigation found that spill occurred during repair work on the Mexican side of the border.

Then  last week,  the mother of all spills dumped 335,000 gallons more, Fox5 reported on May 28, just in time for the Memorial Day weekend.  Imperial Beach Mayor Serge Dedina tweeted on Friday, “335,000 gallons of sewage discharged into TJ River last night from Mexico. It never ends-this is why we need a backup system in the U.S.”

Mexican authorities have indicated they will work to resolve spills and provide prompter notifications to U.S. officials.