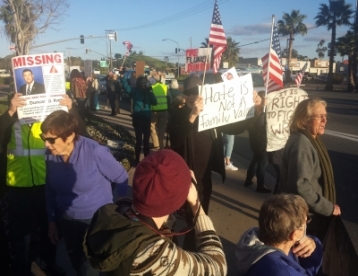 Story and photos by Paul Kruze

February 23, 2017 (El Cajon) --Some 300 demonstrators staged a boisterous rally late Thursday afternoon near the El Cajon district office of 50th District U.S. Representative Duncan Hunter (R-El Cajon) on Magnolia and Bradley Avenue. Hunter’s office issued a release earlier stating that his staff would no longer meet with constituents from the group, then shut down the office today in response to the protest rally.

The protestors held up placards representing a mixed array of concerns over his stances on key issues, drawing attention during rush hour traffic, including demonstrators on an overpass visible to motorists on State Route 67.  Their concerns include repeal of the Affordable Care Act, President Trump’s immigration policies, defunding Planned Parenthood, Trump’s election, and an ongoing investigation of Hunter’s alleged improper use of campaign funds.

Hunter’s deputy chief of staff, Mike Harrison, issued a written press release stating that the office has met with “protest groups” over the several weeks and that their concerns have been acknowledged by the representative.

“Despite repeated requests to the leaders of these groups for cooperation, our office has consistently experienced protest participants filming in the office against our policy. Constituents visiting the office for assistance, including refugees and immigrants, found their way impeded and were in some cases intimidated to enter,” he wrote. Our neighbors have their businesses disrupted and we have witnessed local law enforcement being disrespected, which is unacceptable. “The release goes on to confirm that Congressman Hunter has made the decision that his office will no longer be accepting meeting requests with these groups or their representatives. “While protests are obviously allowed on public areas in accordance with local code, it should be noted that visitors who do not leave the Congressional office when asked to do so are trespassing,” the release concludes.

Rally organizers voiced outrage earlier in the day on Facebook, in a post which read, “Update- we received an email from Hunter's office that we are no longer allowed to come to his office or we will be trespassing! We pay for that office! We pay for those employees! We will not be silenced! He is trying to slander his own constituents for asking him to do his job. We will not back down. Join us tonight to show him and his supporters that we are a peaceful but powerful movement and we will not be silenced! We are perfectly within our constitutional rights to be on public sidewalks, that is where we will be. We will also have Sheriff Sergeant Rinder and his officers on site to help keep the peace. Do not park in Hunter's lot. “

Later in the day, Indivisible San Diego countered Hunter’s press release with one of their own, claiming that similar protests around the country which have besieged other Republ 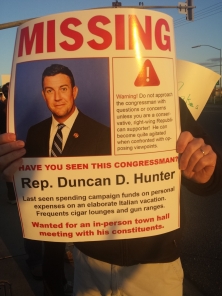 “Since the inauguration, citizens protests across the nation, and across San Diego, have rattled members of Congress, particularly Republicans like Darrell Issa and Duncan Hunter, who enthusiastically endorsed Donald Trump and his policies,” the press release reads.  “The Congressional recess week shows our movement is growing, and has spurred a predictable backlash from the right wing. Just as the Tea Party was denounced as inauthentic in 2009, our civic uprising is under attack from the White House and Congress.” “The more they hide, the louder we will get,” the press release concludes.

One of the organizers of the rally, Santee financial advisor and insurance agent Richard Nyles, said, “I’m concerned that Duncan Hunter is even radical for Republicans. I don’t think that even co-exists with democracy.” While Nyles did acknowledge that Democratic party candidates have traditional done poorly in this San Diego East County Congressional district (Hunter received 64% of the vote to Democratic challenger’s Patrick Malloy 36% in the 2016) he said that the party needs to find a candidate with a military background in order to conquer Hunter’s stronghold on the seat. “What we are looking for this time is a military veteran with some progressive values,” he said. “For that matter, independent values,” he said. “We’d love someone to come in here with a military background that can stand up against Duncan Hunter.”

Nyles said that the protests will continue for the next 100 days every Tuesday at 10 a.m.

Congressman Darrell Issa (R-Vista) whose district encompasses North County San Diego faced an even larger protest earlier in the week  of over 2,000 people, including mostly protesters as well as some Issa supporters. Issa eventually met with the protesters outside of his office but has refused to hold a town hall.

Also participating at the rally  outside Hunter’s office was  El Cajon resident, Patrick Malloy, whose November 2016 election bid against Hunter was unsuccessful. “I’m here to be a part of this Indivisible movement. And most importantly, I’m here to ask people what motivated them to come out here. If I can get elected into office, I plan on keeping my ear to the ground and listening to people to hear what they’re concerned about.”

Malloy noted that there is a lot of concern about the future of the Affordable Care Act. “Our representative is running away from that conversation,” he said. If elected, Malloy promised to hold no less than six town hall events every years. “You’ll definitely have the opportunity to speak directly with your representative or call-in by phone as Hunter does.”

In spite of his recent election loss, Malloy said that the time has come to end what he referred to as the “Duncan Hunter dynasty,” as Hunter’s father, Duncan Lee Hunter, was a Congressman for San Diego in the former 42nd, 45th, and 52nd districts from 1983 through to 2009. “The Hunter dynasty has held onto this seat since the 1980s. And what do we have to show for it? Hunter “junior” after six years in office and $1.2 million  in salary which everybody pays for, has gotten only one bill passed. This district is ready for change, they know what they care about. Not what a president cares about, or a party, or a donor or special interest. That’s what I stand for,” Malloy said.