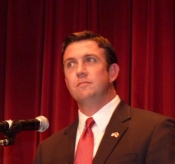 March 7, 2011 (San Diego’s East County) -- Congressman Duncan Hunter (R-El Cajon) recently introduced legislation aimed at curtailing what he views as frivolous lawsuits against small businesses that are allegedly in violation of the Americans with Disabilities Act (ADA). The bill, entitled the ADA Notification Act, would provide businesses accused of an ADA violation with a 90-day grace period to make necessary modifications.

“It’s bad enough that small businesses are facing enormous challenges due to the current economic downturn,” Rep. Hunter said in a press release. “What they don’t need to contend with are any other unnecessary obstacles that impede growth and competitiveness. But that’s exactly what’s happening in San Diego with predatory ADA lawsuits.”

Implemented in 1990, the ADA guarantees equal access to all public and private buildings. In addition, the Act prohibits discrimination based on disability. In California, individuals who accuse businesses of failing to comply with the Act may seek monetary damages in excess of those granted under the federal law.

Consequently, San Diego and East County small businesses have faced numerous lawsuits accusing them of violating the ADA. Lacking adequate legal resources, these businesses often settle out of court. Some plaintiffs have filed suits without offering businesses an opportunity to correct the deficiencies.

In some cases, plaintiffs have taken money in settlement while failing to assure that the violations in question were even rectified. Some local business leaders have likened this practice to a systematic shake-down for money, according to small business owners who have spoken out in local Chamber of Commerce meetings about their experiences.

Scott Alevy, President and CEO of the San Diego East County Chamber of Commerce, told ECM that “the ADA was a strong piece of legislation passed over 20 years ago with very good intent and with very good reason. What’s happened is that it’s created an opportunity for some people who might not have the best intent or are maybe self-serving, and has given them the chance to put undue pressure on small businesses. My understanding of the legislation is that it addresses some of those issues.”

Regarding the issue of frivolous lawsuits, Alevy said, “We are aware it’s a problem, and are frankly quite grateful the Congressman has taken up the mantle.” He did note, however, that the Chamber of Commerce hasn’t fully vetted or taken a position on this specific piece of legislation.

Louis Frick, executive director of Access to San Diego—an organization dedicated to promoting independent living and full inclusion of those with disabilities into the community—is against the proposed legislation and believes that “any business should know what laws affect their bottom line.”

“I believe rather than more legislation, education is important,” Mr. Frick said. He added that he gives presentations around the community to educate local businesses on ADA compliance. “I am a huge advocate for education, and I’m very willing to freely go and educate any businesses or business organizations,” he said.

In addition, Frick pointed out the availability of tax credits to help small businesses offset the costs of ADA compliance.

Rep. Hunter proposed a similar bill during the 111th Congress, which never left committee. The current version of the bill, labeled H.R. 881, has been referred to the House Committee on the Judiciary, where it awaits further action. With Republicans now in control of Congress, the prospects are more likely that the measure may advance this session.