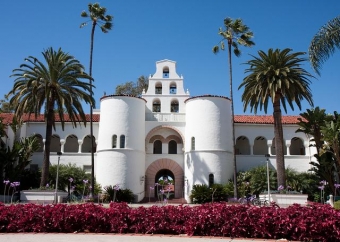 January 25, 2019 (Washington D.C.) — Congressman Duncan D. Hunter (R-Alpine) has introduced H.R. 483, the “No Funding for Sanctuary Campuses Act.” More than 200 colleges and universities stand to lose major funding if the bill were enacted, likely including the University of California system and California State University campuses such as San Diego State University.

According to a press statement from Hunter’s office, the bill  would withhold federal funding including Title IV (Pell Grants, federal backed loans and more) to any educational institution that “undermines federal immigration law and awards in-state tuition and other public benefits to students who are here illegally.”

Over 200 college and university campuses have active petitions to school administrations deeming their institutions to be “sanctuary campuses” Hunter says, citing lack of cooperation with border enforcement agencies and providing benefits for undocumented students as activities he hopes to end.

Rep. Hunter acknowledges that Title IV funding is “essential for nearly every academic institution” but insists, “If colleges and universities choose to deem themselves “Sanctuary Campuses,” then I believe Congress has every right to withhold federal funding.”

An estimated 65,000 undocumented students each year graduate high schools in the U.S. each year, GovTrackInsider reports, including many who were brought here as infants or children and earned protections during the Obama administration under the DACA program. Many go on to obtain college degrees and become productive members contributing to the economy.

The Trump administration has actively sought to roll back Obama-era protections and deport undocumented students. Opponents of such policies argue that young people should not be blamed for actions of their parents.

“With DACA, our students and alumni have been able to pursue opportunities in business, education, high tech, and the non-profit sector; they have gone to medical school, law school, and graduate schools in numerous disciplines,” stated a letter signed by hundreds of American university presidents. They are actively contributing to their local communities and economies.”

The chancellors of both the UC and CSU systems in  California signed that letter, along with presidents of numerous individual UC and CSU schools and other institutions.

“To our country’s leaders we say that DACA should be upheld, continued, and expanded,” the letter continued. “This is both a moral imperative and a national necessity. America needs talent — and these students, who have been raised and educated in the United States, are already part of our national community.”

Hunter’s bill has little or no chance of passage, since Democrats won 40 seats in the November election to take back a solid majority in the House of Representatives and have championed protections for young immigrants in the party’s call for comprehensive immigration reforms.

The term is a slur, history will not view you kindly for using it in polite company. The dreamers are kids who grew up here, they belong in this country in every way except U.S. citizenship. All the while their parents built your decks, made food for you and started innumerable businesses and paid their taxes, some in this country have hated on them for demonstrating more of what it means to be a citizen of this country than many of the aggrieved. That is the history here Twiggy, time to understand your place in it.
I thought Dreamers now were adult illegal aliens in America. If so, why all the emotion and compassion for something that is not? I believe in my Country and the rule of law. Diluting it sends the wrong message as in this case. As to Hunters efforts, he well knows he is shoveling S--- against the Democratic tide. One huge point does not get any headlines and that is the "billions" of dollars from our pockets that Dreamers and "illegals" are taking from our spendable income and American balance sheet.
Duane Hunter only has the bandwidth to work on bills because his own party stripped him of his committee assignments. And what does he use his spare time for? More cruelty and intolerance to feed a demographically shrinking base, many of whom have never thought twice about using the labor of immigrants, and who were happy to spend the taxes these workers paid. Nevertheless, they racially resent them, and hate the kids they brought with them after we informally invited them to work. (You can't deny, we did in fact employ them willingly.) So, this racist wing of Hunter's party fights all that is decent, good and right for these culturally U.S. (meaning diverse, optimistic, the future) kids we call dreamers. Well, we will not have to worry about this mean, hateful congressman for long. He has a strong chance of being primaried by his own party, that if he is not already in prison for stealing campaign funds. Bye Duane! (Aka, "Duncan", his retired congressman dad's name that he borrowed to help get elected in the first place...)