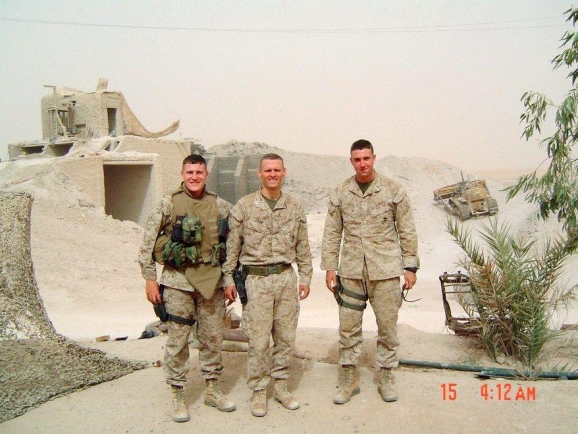 June 2, 2019 (San Diego) – Republican Congressman Duncan D. Hunter is drawing fire for admitting that he fired at civilians in Iraq while serving combat duty with the Marines, also posing with corpses of dead enemy combatants.

Hunter has been vocal in his public support of Chief Special Warfare Operator Edward Gallagher, a San Diego-based Navy Seal charged with war crimes including shooting at civilians and fatally stabbing a young wounded prisoner, then posing with the corpse.

During a town hall meeting in Ramona over Memorial Day weekend, Hunter stated that Gallagher “did one bad thing that I’m guilty of too –taking a picture of the body and saying something stupid,” Times of San Diego reported, posting an audio recording.

Hunter doubled down on those remarks during a later taped interview with the online site Zero Blog Thirty, in which he stated, “So, I was an artillery officer and we fired hundreds of rounds into Fallujah, killing probably hundreds of civilians,” adding, “probably killed women and children if there were any left in the city when we invaded. Do I get judged, too?”

As for the charges Gallagher faces of murdering a teenage ISIS fighter who had been brought in for medical treatment, Hunter told Zero Blog Thirty, ““I frankly don’t care if he was killed. I just don’t care.” He added that even if Gallagher did stab the wounded prisoner to death, he still “deserves a break”, indicating Gallagher should not be held accountable for violating the Military Code of Justice.

U.S. soldiers have been prosecuted for taking photos with dead bodies of enemy combatants, though typically with aggravating circumstances such as desecrating a body.

Shooting at civilians, if done intentionally, can be charged as a war crime, but not civilian deaths that occur as a result of what the military calls “collateral damage” when targeting enemy forces.  International human rights organizations have long raised concerns that some U.S. military actions in Fallujah violated the international code of justice including what some have termed “massacre” of civilians there in 2004. The military has contended that U.S. soldier were fired upon by insurgents and that the military siege was justified.

Hunter’s unit was in Fallujah in 2004. Aaron Glantz at the investigative reporting site Reveal reported in his eyewitness account that in 2004:

“Retired Gen. James Mattis earned the nickname “Mad Dog” for leading U.S. Marines into battle in Fallujah, Iraq, in April 2004. In that assault, members of the Marine Corps, under Mattis’ command, shot at ambulances and aid workers. They cordoned off the city, preventing civilians from escaping. They posed for trophy photos with the people they killed.

Each of these offenses has put other military commanders and members of the rank and file in front of international war crimes tribunals. The doctrine that landed them there dates back to World War II, when an American military tribunal held Japanese Gen. Tomoyuki Yamashita accountable for war crimes in the Philippines. His execution later was upheld by the U.S. Supreme Court.

During the siege of Fallujah, which I covered as an unembedded journalist, Marines killed so many civilians that the municipal soccer stadium had to be turned into a graveyard.

In the years since, Mattis – called a “warrior monk” by his supporters – repeatedly has protected American service members who killed civilians, using his status as a division commander to wipe away criminal charges against Marines accused of massacring 24 Iraqi civilians in Haditha in 2005 and granting clemency to some of those convicted in connection with the 2006 murder of a 52-year-old disabled Iraqi, who was taken outside his home and shot in the face four times.”

Even if the orders to fire artillery rounds into the city of Fallujah were legal, Hunter’s apparent lack of any remorse over killing innocent women and children is disturbing to some constituents; many veterans return suffering post-traumatic stress disorder, haunted by guilt over their role in such bloody conflicts.

President Donald Trump has indicated he is considering pardoning Gallagher and other U.S. soldiers if they are convicted of war crimes.  Some have suggested that Hunter, a staunch Trump support, may be angling for a pardon for himself if Hunter is convicted of felonies when his own trial commences in September.

Hunter and his wife are charged with stealing $250,000 in campaign funds and spending it on lavish personal expenses including vacations in Italy and Hawaii, expensive jewelry, tuition at his children’s school, and airfare for the family’s pet rabbit. Hunter is facing 60 federal charges.  If convicted, whether pardoned or not, Hunter would almost certainly face expulsion from Congress by the Democratic majority in the House of Representatives.

Ammar Campa-Najjar came within just a few percentage points of toppling Hunter in the 2016 election, after Hunter’s indictment became public. The Democratic candidate has amassed a large campaign war chest for the 2020 race in a race that has drawn national attention and fundraising efforts.

Campa-Najjar has issued this statement: “I believe Eddie Gallagher deserves the presumption of innocence and a fair trial, just like any other American.  Ultimately, a jury of Gallagher’s military peers will determine his fate and that’s the way it should be. The politicians should stay out of it.”

Hunter has become very arrogant and apparently thinks he's coated with Teflon, therefore cannot be held accountable for what he allegedly did over in the sandbox. Perhaps this may be actually true, if he's buddies with Trump. We'll eventually find out. Considering these recent events and what has happened in the past, coupled with his attitude, it does not seem as if he's serving the public with their best interests in mind. No apologies, just an unacceptable attitude. At least for some of us.