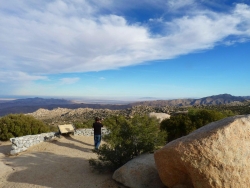 January 16, 2012 (San Diego’s East County) – Richard Bradley Smith, 61, was found dead this morning by San Diego Sheriff’s Search and Rescue volunteers. Smith had become separated from friends while fowl hunting in the McCain Valley area of Boulevard, near Cottonwood Campground. He resided in San Diego with his wife.

When he failed to meet back up with his friends, the Sheriff’s Department mounted a search yesterday on foot and by air, but was halted overnight due to darkness. Temperatures fell to near freezing during the night and resumed this morning.

The Medical Examiner has not yet determined cause of death, however officials have indicated there were no obvious signs of trauma and a heart attack is suspected.