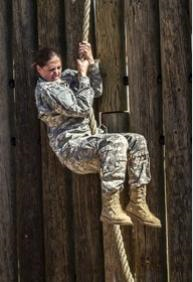 February 7, 2016 (Washington D.C.) - Congressman Duncan Hunter has introduced the Draft America’s Daughters Act, a bill that would require young women to register for the Draft with the Selective Service.

Hunter, a Republican representing East County, introduced the measure along with Congressman Ryan Zinke of Montana as a protest measure against the Obama administration’s decision to open combat roles to women in the military.

The U.S. military is currently comprised of all volunteer forces, though young men are required to register with the Selective Service when they turn 18 in case a draft is revived. Hunter’s bill would require young women ages 18 to 26 to also register.

According to the Washington Post, Hunter said, “If this Administration wants to send 18-20 year old women into combat, to serve and fight on the front lines, then the American people deserve to have this discussion through their elected representatives.”

Last week, Army Chief of Staff General Mark Milley and Marine Commandant General Robert Neller testified before the Senate that they believe there should no longer be an exemption in the draft for half of the country’s population now that the military is inclusive of women in combat.

Ironically, Hunter, a former Marine, added that he would probably vote against his own proposal.

The proposal to draft women raises some troubling issues, since women may face special risks beyond those confronting me.

Polls show that a majority of Americans now say they would support having women register for the draft.  But they may not be aware of the special risks associated with such service for women.

The Los Angeles reports that recent studies by the Department of Defense and Veterans Affairs, 23% of women in the military experienced sexual assault and 10% of military women reported that they had been raped.

In addition, women veterans commit suicide six times more often than men who are veterans.  In addition, chemicals that American troops have been exposed to in past wars were found to cause birth defects in their children.  In addition, pregnant women in the military who received the anthrax vaccine also had higher rates of children with birth defects.

Are these really risks that all young women should be forced to take solely because some military women volunteer to do so?  Should equality of opportunity mandate equal responsibility for all, or should protecting a generation of children not yet born factor into the equation?

These are tough questions, and Hunter’s provocative bill raises the opportunity for discussion on these important issues.

First Congressman Hunter proposes a bill to draft women. Then he says that he probably will not vote for it. Flip-Flop!

"Are these really risks that all young women should be forced to take solely because some military women volunteer to do so? Should equality of opportunity mandate equal responsibility for all, or should protecting a generation of children not yet born factor into the equation?"....No, females who require lactation rooms and maternal leave shouldn't be allowed especially in the combat arms, and more especially in the infantry because they can't bear as much weight as men, plus the other factors. ...PS: I recently got banned from Facebook for posting this preceding comment because "it doesn't meet community standards.".... So the ultra radical feminist PC corps was present for duty and straightened things out regarding "community standards."....And now Duncan Hunter has seen their bid and raised the stakes -- good for him. It's a blow for women, who in the military are great (even superior) as managers but lack the testosterone, strength etc. required for battle.
http://www.gq.com/long-form/male-military-rape http://thinkprogress.org/world/2014/05/01/3433055/dod-men-mst/ http://www.nytimes.com/2013/06/24/us/in-debate-over-military-sexual-assault-men-are-overlooked-victims.html?_r=0
First, Miriam, the majority of sexual assaults in the military are against MALES, usually by male homosexuals. “It appears that the DOD has serious problems with male-on-male sexual assaults that men are not reporting and the Pentagon doesn’t want to talk about,” Elaine Donnelly, who heads the Center for Military Readiness. She noted that only 2 percent of assailants are women. That being said, when feminists, and their liberal lapdogs, push for "equal rights" for women, e.g. assignment to combat units, they must realize that responsibility comes with that position. In this case, at 18, EVERY American (minus certain categories such as Special Needs, etc.) should register for the draft. Israel, https://en.wikipedia.org/wiki/Conscription_in_Israel is but one nation that has compulsory service for both genders.

If you have stats on the percentage of men in the military who are sexually assaulted please provide the link.

"For the second year in a row, the Defense Department reports that more men than women suffered sexual assault in the military in 2014, a surprising wrinkle for a Pentagon struggling to get a handle on an epidemic that has sparked fury on Capitol Hill and among the public. The department estimates that a total of 20,300 service members — 10,600 men and 9,600 women – were sexually assaulted or were the victims of what the department calls “unwanted sexual contact” during the course of the year."--May 1, 2015 -- here
Finally, finally, finally, Duncan Hunter, the neocon gawd, has come up with a good idea. If women really want to be equal to men, they must also share in the responsibilities.